Ghosts Are Gone. Gone! Stevie Nicks cut In Your Dreams track from setlist in Hershey

Stevie dropped "Ghosts Are Gone" from her setlist in Hershey, PA on July 3rd.... and didn't replace the song with another... Bit surprised she's dropped a song at this stage... Usually within the first couple of shows things may change, but when the setlist carried through to Holmdel and New York City after opening night in Jones Beach on June 29th, I figured it was safe to say this was going to be the setlist for her summer shows... Apparently not! 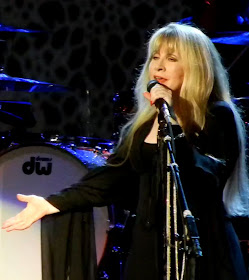 One poster had a lot to say about the Hershey show, the setlist... Stevie's new album... What she's playing on this tour.. but most importantly, what she ISN'T playing on this tour.. And I have to agree with them in terms of some of the song selections and the opening tune.... Check it out for yourself in the comments section...

And to the Anonymous poster that posted it... NO, I won't delete your post.  I think it's fair and constructive criticism, and you make some good points, one of which - She should have dropped Rock N Roll and opened the show with the title track from the CD "In Your Dreams"!  This track fits so perfectly to open the show... It's exactly the right tempo.  PLUS for the most part, you ALWAYS remember the first tune at any concert!  At least I do.

Imagine this as the opening number...  Can you feel it?