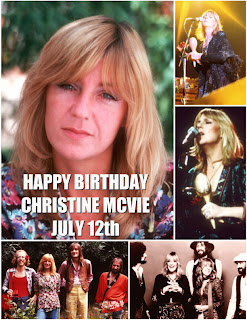 Christine Perfect began her music career in 1968, performing with the bands Chicken Shack and Sounds of Blue.  She was voted best female vocalist in the 1969 Melody Maker poll. Two years after marrying John McVie in 1968, Christine joined Fleetwood Mac in 1970 and went on to play a crucial part in the band’s evolution for the next 25 years. Christine wrote and performed on multiple best selling platinum albums, including Rumours, one of the best-selling albums of all time. Her classic work includes the songs You make loving fun, Say you love me, Don't stop, Over my head, Hold me, Everywhere and Little Lies.

Her soulful alto, keen melodies, sensitive lyrics, and grounding presence were a focal point for nearly 30 years in Fleetwood Mac, which began as a blues band in the early 70's only to shoot to super-stardom in the mid-70's. Fleetwood Mac went on to become a benchmark to rock and roll with the band's music very much embedded in popular culture today partly due to Christine's contribution.

Christine left Fleetwood Mac after the highly successful 1997 Reunion album "The Dance", subsequent tour and induction into the Rock and Roll Hall of Fame in 1998.

Since retiring from music, leaving the band and moving back to the UK,  she's rarely been spotted in public except for a few times in early 2000's. On July 20, 2000 she received an honorary doctorate degree in music by the University of Greenwich in honor of her major contribution to international popular music. In her acceptance speech she stated "I find the prospect of standing here before you today more daunting than singing in front of 65,000 people at Madison Square Gardens in New York".

Being virtually non-existent in the music industry since 1998, it was a nice surprise for fans world wide when it was announced Christine was working on a solo album. The CD "In The Meantime" recorded in Christine's home studio, London and California was released in June, 2004. The CD was produced by Christine, her nephew Dan Perfect and Ken Caillat (Rumours and Tusk).

In 2009 Christine also attended one of Fleetwood Mac's "Unleashed" tour shows at Wembley Arena in London.

The last known public photo of Christine is from 2010 where she was photographed walking her dog in the village in England where she lives.  The photo ran in the local press where a story broke about how she joined a consortium to purchase land next to her property to protect it from development.

Christine McVie turns 69 today and from Fleetwood Mac News and Reviews, we wish you a very Happy Birthday, with many happy returns.... You are still missed.