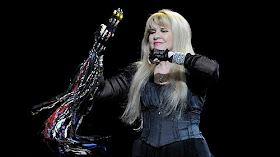 
There's no question that Stevie Nicks and Rod Stewart are legends in the music industry. One was a founding member of Fleetwood Mac, and was once called "The Reigning Queen of Rock and Roll" by Rolling Stone Magazine- not an accolade to be taken lightly. The other is one of the best-selling musicians of all time, both domestically and in the U.K., where he's spawned an obscene 31 Top Ten singles.

It's also pretty obvious that the masses understand what it is to have two Rock and Roll Hall of Famers touring together. Consol Energy Center was decidedly packed on Saturday night, from the folding chairs on the floor space far up into the nosebleeds. And despite what was likely a higher average age than most concerts at Consol, many came out in full dedication, sporting Stevie Nicks outfits or Rod Stewart hairdos.