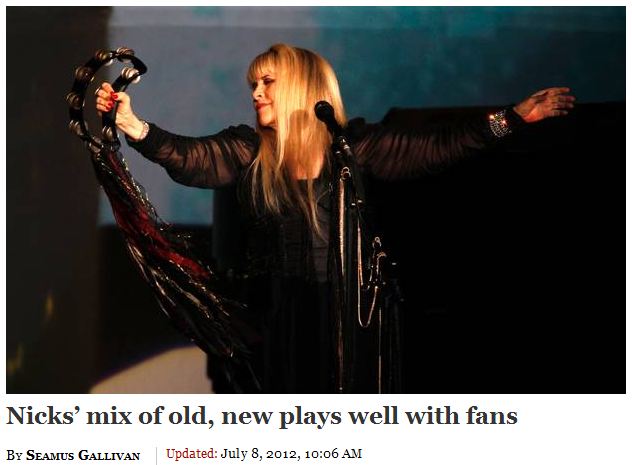 
NIAGARA FALLS – If one were to look only at the concert schedule for Saturday night in Niagara Falls and not at recent news of restoring waterfront access and attracting young professionals through an innovative program that pays off student loans, one might think the Cataract City is more passe than progressive.

Likewise, one might also equate the offering of Fleetwood Mac singer Stevie Nicks at Seneca Niagara Events Center with that of classic rockers The Guess Who at Hard Rock Cafe Niagara Falls at the other end of Old Falls Street; there is a profound difference, however, which Nicks stated in no uncertain terms before an adoring sold-out crowd made up mostly of baby boomers.

The 64-year-old Nicks and her eight-piece band paced their long set by bouncing back and forth between her considerable collection of hits from the ’70s and ’80s and more recent material, directly declaring her desire to create new material and avoid a “greatest hits” show. For the most part, this was well-received, although the show opened ominously – taking the stage with a tepid take on Led Zeppelin’s “Rock and Roll” that could’ve been topped by a common cover band playing at the casino bar, the fact that Nicks has lost a step was made plain, as she stood still instead of flashing any sight of her signature gypsy twirling, and her confident but staid contralto voice belied the wildness of Robert Plant’s pyrotechnics on the original.

Thankfully, this slow start was soon forgotten, as Nicks loosened up a bit with “Enchanted,”....

Read the full review at the original site

ALSO...
Check out this short review of Stevie show in Detroit July 6th - by Photographer Marc Nader.. He includes 29 photos with his written piece on the show.  See The Music