Stevie's truly turning into Bob Dylan! Bob Dylan never plays the same setlist night after night and again Stevie surprises and changes the set again last night in Pittsburgh. Crowd pleaser "Leather and Lace" with her vocal coach Steve Real was back in the set replacing "For What It's Worth". I think it's great that Leather and Lace is back but it's sad that it had to replace "For What It's Worth"! She sounds so great on that one live... With Moonlight, Annabel Lee and For What It's Worth not in the set, that leaves only two from In Your Dreams being played with 5 Solo tunes, 4 Fleetwood Mac and 1 cover.  Given her time frame to perform is short compared to a solo show, I'm sure it's a tough decision to leave tunes out of the set, maybe she could alternate, and keep people guessing... Again, no duets with Rod... I think it's pretty much a given that going forward we won't see Stevie during Rod's set.

Melodic Rock Concerts
73 Photos in the Gallery That you HAVE to see!

PHOTO GALLERY - 13 Photos from WPXI
(includes the two below) 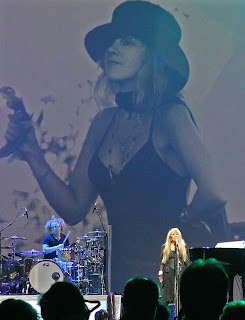 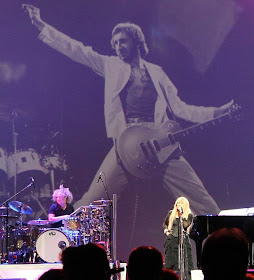 Check out Karen Howell's Photo Gallery on Facebook.
Over 40 shots of Stevie including this stunner! 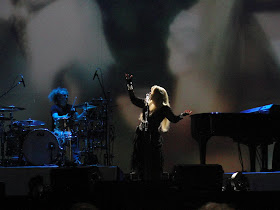 Well, Mr. Buckingham earned a 5/5 last night in Atlanta. The one thing I can do with a guitar is fingerpick it properly with an alternating bass and a melody on top. So naturally I look down on people who fingerpick differently (like LB) or can't fingerpick like that at all (Paul McCartney). Last night, Lindsey used his fingerpicking style to lay out a beautiful, rich tapestry of notes. It was gorgeous. Apparently he was looping a lot and I didn't f-ing catch it (alcohol) so no doubt that helped with the tapestry. I thought he might struggle with his voice. Wrong. His voice was fantastic for the whole ~80 min show. I read a review of a different show in which the crowd was so loud Lindsey had to ignore the dynamics of his song and play and sing everything loudly for the whole show. Last night was totally different. He played and sang so softly at times it was almost like a whisper. The crowd was dead silent. Fantastic. Lindsey played with no band, and used backing tracks for some of the electric numbers, all of which contributed to a very intimate show. Naturally people expect performers to tells stories in shows like that. That part didn't work too well. LB seemed a little nervous and forced telling stories. Fortunately, story-telling was kept to a minimum. Also odd was that the one number that didn't seem to work was Go Your Own Way. LB's mistake was playing it right after the epic power-ballad I'm So Afraid. The show gets five stars anyway. So in case it isn't obvious, don't miss Lindsey Buckingham.


This cracked me up last night... An after show snap shot of Lindsey... with explanation in the Tweet below.