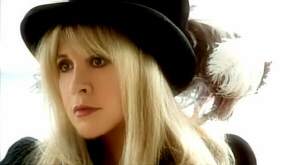 by Brandi L. Neal
What I Say


Some day Stevie Nicks is going to hire me to ghost write her autobiography – just as soon as I convince her we are perfect for each other. I just saw Stevie in concert again last night in Boston and I am, as usual, amazed at the talent and dedication of this woman. Even as she enters her mid-sixties, she is sexier, more passionate and more talented than performers one-third her age. And, she’s done it all without ever cashing in on her position as a sex symbol. As the woman who penned some of rock ‘n’ roll’s most recognizable songs like “Landslide” and “Gold Dust Woman,” Stevie has earned her position in music history as the only woman to successfully lead a band while simultaneously piloting an equally successful solo career.

I have been enthralled with this gypsy woman ever since I awoke to “Sometimes It’s a Bitch” blaring from my clock radio when I was 13. As a woman and a writer myself, I see Stevie as a role model. She struggled for years cleaning houses and waiting tables before joining the British blues band Fleetwood Mac with then boyfriend Lindsey Buckingham when she was 27, basically turning it on its ear. The group was looking for a guitar player, not a female lead singer and songwriter and only took her because Lindsey refused to join without his musical and life partner. The band figured that if she sucked they could simply sack her.

At first no one took her very seriously and she had to work twice as hard to prove her worth as critics dismissed her as flaky and her voice as too raucous. During her second album with Fleetwood Mac, Stevie finally earned the respect she deserved when she penned the band’s only number one single, to date “Dreams,” and has since become the most successful and most beloved member of the seventies super group, much to the chagrin of former boyfriend Buckingham.

Though successful and talented beyond comprehension, Stevie is far from perfect. Like every human being she is beautifully flawed, and she’s honest about it. As a nonfiction writer I appreciate when someone can take themselves to task just as much as they take everyone else. Stevie spent decades addicted to cocaine and tranquilizers. She had affairs and ruptured breast implants, and she’ll tell you about all of it. She’ll tell you all of the dirty details, her role in the chaos and how she dug herself out of hell with her bare hands and a little help from her friends. She takes all of the pain she’s walked through and turns it into teachable moments and visceral songwriting, and as a result she is a better artist, a better woman and a better mentor for the next generation of female musicians. In the fifteen years I have seen her in concert, I have never seen Stevie not completely covered from neck to feet, barely even a wrist showing, and I can’t imagine a more appealing or enchanting woman who oozes the natural allure that emanates from Stevie.

After getting her head straight, Stevie started visiting wounded soldiers at Walter Reed hospital in Bethesda, Maryland. Most of these men weren’t even born when she was at the height of her fame snorting a hole through her nose the size of a quarter. Sure maybe they remember their parents rocking out to “Rhiannon,” but these wounded warriors have no idea who Stevie Nicks is, and that’s just fine with her. She brings them iPods loaded with her favorite music. She sits with them. She listens to them. She becomes their mother, sister and friend.

After she first began visiting Walter Reed in 2007, Stevie wrote a poem turned song called “Soldier’s Angel” that appears on her most recent album, “In Your Dreams.” At the July 10, 2012 concert in Boston she gave a lengthy introduction to the song that included an onstage appearance by Vincent Mannion, a soldier with Traumatic Brain Injury whom she met during some of her first visits to Walter Reed. Mannion and his family walked onto the stage and embraced Nicks, and amid tears Mannion told the crowd that Stevie was his best friend.

I have my own issues with war and the military because my father suffered severe post-traumatic stress disorder upon returning from Vietnam and died of alcoholism in 2008. What I can appreciate is Stevie’s commitment to fighting for the best care for these wounded soldiers without taking a stance on the war. No matter my opinion on combat, Americans returning from the trenches deserve the best care available and instead often receive worse care than stray animals, as was the case with my dad, and when he died and was buried in Arizona, I had my own white-winged-dove experience mirroring “The Edge of Seventeen.”

One of the things I love about Stevie is that she’s real. Despite not living in the real world (as Tom Petty likes to remind her), she continues to make new music  four decades into her career because that’s all she’s ever wanted to do. She doesn’t need the money or fame. She doesn’t care if she sells a single record. She does it because she loves it, and when you see her onstage, it’s obvious. She has given up everything for her art -- love, family and a good portion of her sanity -- but she’s not bitter. It would be easy for a woman to get angry about not being able to have it all the way a man can. Her male band mates have young children, an option she gave up a long time ago, because unlike men, women don’t have fifty or sixty years to decide that they’re going to have a family when they get around to it, and few men can withstand being with a powerful women who is always on the road and is more successful than he will ever be. Most men just aren’t this secure. For many women at the top, it’s one thing or the other.

Despite all of her sacrifices, its clear Stevie has made the right choice. The world is a better place because she’s in it. She’s found out how to navigate and succeed in a man’s world on her terms, as a woman, and she’s an angel to people like Vincent Mannion and his family, and to little girls like me, who can see by her example that it’s okay to make mistakes, it’s better to keep your clothes on, and if you want something badly enough, there is no other option except to go out and get it.

Brandi Neal is a professional writer based in Toledo, Ohio. Her writing has appeared in Portland Magazine, Port City Life Magazine, MovieMaker Magazine, Teaching Tolerance Magazine, The Takoma Voice, The Silver Spring Voice, The Community Leader, The Coastal Journal, The Journal Tribune, Mainebiz, Freshly Hatched and the six weekly newspapers of Mainely Media. She was also a fiction editor for the inaugural issue of the literary review, The New Guard and she was the co-editor of the Winter 2011 Edition of Stonecoast Lines.