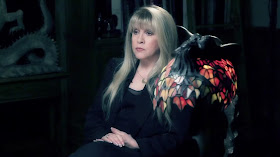 IN YOUR DREAMS DOCUMENTARY UPDATE:


Stevie says filming was from February to December, 2010 which we knew... She also says they edited it down from 100 hours down to 3 hours, then in the last four months, they edited it down from 3 hours to 1 1/2 hours.  She says it's like an old fashioned Rock & Roll Film.  She didn't announce a release date... But reports last week indicate that it should be out by the end of this year.  Interview was during the Songwriters Hall of Fame Induction Ceremony in New York City June 14th


"We filmed it. And we filmed it from February to December. And it took them all year to actually edit it from 100 hours to three hours and in the last four months we've edited it down to an hour-and-a-half. Um, it's really a magical little film, because it really shows you -- it's like and old fashioned rock n' roll film about how, y'know, you go. . . My idea and Dave's idea was Led Zeppelin recording at the Grange. So we said. 'We have. . . I have a big old house, so let's record the record there' -- and that's what we did."