There is a half Page Fleetwood Mac spread in today's L.A. Times (August 21, 2012) in the Calendar section, page D3 titled "Back To Mac"

On-line the article is titled:
Fleetwood Mac is summer listening with pop and heft

Fleetwood Mac albums last. So listen. You can also read about one ('Making Rumours' by Ken Caillat) and listen to tributes ('Just Tell Me That You Want Me').

You can read the full article on the L.A. Times Music Blog 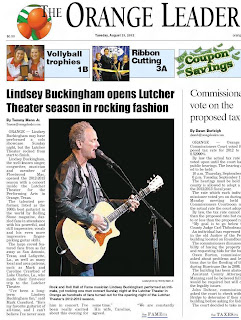 Today's front page of The Orange Leader features a review of Lindsey's show at The Lutcher Theater on Sunday, August 19, 2012.  Great shot of him too!


ORANGE — Lindsey Buckingham may have performed a solo showcase Sunday night, but the Lutcher Theater rocked from start to finish.

Lindsey Buckingham, the well-known singer, songwriter, musician and member of Fleetwood Mac, opened the 2012-2013 season with a concert inside the Lutcher Theater for the Performing Arts in Orange, Texas.

The talented performer, listed as the 100th best guitarist in the world by Rolling Stone magazine, dazzled fans in attendance with his powerful, and still impressive, vocals and his even more impressive fingerpicking guitar skills. The large crowd featured fans from as far away as San Antonio, Texas, and Lafayette, La., as well as many local and area patrons, such as Mark and Caroline Crawford of Lake Charles, La., who made their first-ever trip to the Lutcher Theater.


It was a packed house Monday night at Fitzgerald's when Fleetwood Mac's Lindsey Buckingham took the stage, albeit this time with a very "small machine:" Himself. No bells or whistles, just him and mostly his guitar.

Buckingham began the evening with the beautiful "Cast Away Dreams" before launching into the newer Fleetwood Mac classic "Bleed To Love Her." Though the song was rather harmonious as is, I couldn't help but hum along in my head Stevie Nicks and Christine McVie's parts as heard on the original recording.