Lindsey Buckingham, within arm's reach at One Eyed Jacks 8/18 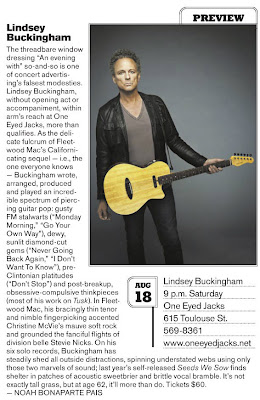 The threadbare window dressing "An evening with" so-and-so is one of concert advertising's falsest modesties. Lindsey Buckingham, without opening act or accompaniment, within arm's reach at One Eyed Jacks, more than qualifies. As the delicate fulcrum of Fleetwood Mac's Californicating sequel — i.e., the one everyone knows — Buckingham wrote, arranged, produced and played an incredible spectrum of piercing guitar pop: gusty FM stalwarts ("Monday Morning," "Go Your Own Way"), dewy, sunlit diamond-cut gems ("Never Going Back Again," "I Don't Want To Know"), pre-Clintonian platitudes ("Don't Stop") and post-breakup, obsessive-compulsive thinkpieces (most of his work on Tusk). In Fleetwood Mac, his bracingly thin tenor and nimble fingerpicking accented Christine McVie's mauve soft rock and grounded the fanciful flights of division belle Stevie Nicks. On his six solo records, Buckingham has steadily shed all outside distractions, spinning understated webs using only those two marvels of sound; last year's self-released Seeds We Sow finds shelter in patches of acoustic sweetbrier and brittle vocal bramble. It's not exactly tall grass, but at age 62, it'll more than do. Tickets $60. — Noah Bonaparte Pais - Best of New Orleans


"If you purchased tickets on Ticketweb, We will have someone wrist banding people at the door starting at 6pm.  We do not issue paper tickets.   We will have a Will Call list at the door.  You must have a valid ID that MATCHES the name on the Will Call list.  If you purchased more than one ticket, all persons in your party must be present to receive a wristband.  You may pick up your wristband and enter the club later once the doors have opened."