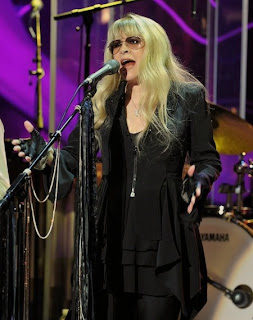 will re-air through out August in various PBS markets... Here are just some of the US states/stations and times.  There are likely more air dates.. check your local PBS station.


Stevie Nicks, Waddy Wachtel, Sharon Celani and Lori Nicks all took part in the recording and filming of The Ultimate Buddy Part before a live audience in Hollywood on what would have been Buddy Holly’s 75th birthday (September 7, 2011), this extraordinary concert features a once-in-a-lifetime line-up of three generations of top recording artists performing the music of Buddy Holly.

Stevie contributed "Not Fade Away" (which you may have heard being played prior to her coming on stage during this summers solo tour) and "It's So Easy".  "Not Fade Away" can also be found on the CD release Listen To Me: Buddy Holly. "It's So Easy" can only be found on the TV broadcast and on the DVD which to date has only been offered to contributing members of PBS.  Both tunes below.