Players Only Love You When You’re Playing: Stevie Nicks Gets a Biography 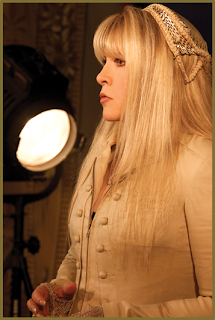 
Stevie Nicks has finally passed the milestone into the same sainthood with a new biography on the queen of Fleetwood Mac acquired by St. Martin’s Press.

Written by Stephen Davis, who met Ms. Nicks in the 90s when working on Mick Fleetwood’s autobiography, Fleetwood: My Life and Adventures in Fleetwood Mac, this new book will chronicle the songstress’ forty year career, including those ten years she spent shying away from the spotlight after the breakup of her band and the dissolution of both her major love affairs.

From the press release:

Nicks’ hard-rocking paeans to Welsh witches, seductive sorceresses, and lonely goddesses are a source of inspiration and mystery to millions of fans, even bringing to bear “The Night of 1000 Stevies” where her devotees dress in her trademark costumes. This long overdue biography will shed new light on her unreported early career, her tumultuous love affairs and private life, and struggles with drugs, and will make it clear that even today, Stevie Nicks is nobody’s heritage act.

The Night of 1000 Stevies sounds like a George Romero film, but hey, no judgement.

No word yet either, on the title, or whether Ms. Nicks has authorized this bio, but we’re sure it’s better than that docudrama that Lindsay Lohan planned on making when she tried to acquire the singer’s life rights. To which Stevie Nicks eloquently responded, “Over my dead body.”


Elizabeth Beier at St. Martin’s Press took North American rights to a biography of Stevie Nicks by Stephen Davis (author of Hammer of the Gods: The Led Zeppelin Saga). The book, which the publisher claims will be the “first comprehensive” take on the singer, is by the man who helped Nicks’s former bandmate, Mick Fleetwood, write his autobiography, which came out in 1990, Fleetwood: My Life and Adventures in Fleetwood Mac. (SMP said Davis first met Nicks in 1988, when he was traveling with Fleetwood Mac and working on that book.) David Vigliano and Anthony Mattero, at Vigliano Associates, represented Davis.

On the surface this sounds interesting and it's hopeful that we may see something... But on a personal level, I'll believe this when I see it.  Going by what Stevie has said in the past about writing her story, a traditional bio is not something she's interested in doing... But I know.. MANY people would love for her to write her story.