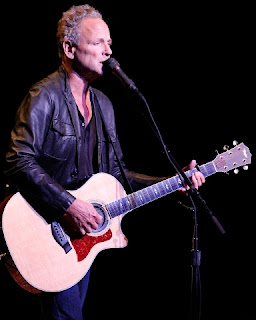 
When you are a voice and a songwriter inside a big machine like Fleetwood Mac, you must feel somewhat anxious to stretch out and impress the world with your own voice. Lindsey Buckingham may have felt like an equal, but he’s been the first among equals when it comes to his influence on the production and arrangements of the mighty Mac. Although his former paramour Stevie Nicks has had the far more popular solo career, the more experimental and technically impressive songs have graced Buckingham’s solo albums.

Appearing in a black leather jacket, black v-neck shirt and dark blue jeans with his still unruly hair (although higher on the forehead), Mr. Buckingham’s lean physique was practically wired as he unleashed cascading torrents of arpeggios and searing solos on the more aggressive songs. There was nearly a standing ovation after each song – the audience at the Cendera Center was into his music and his instrumental and vocal prowess.

His set featured a lot of recent selections from his later solo albums like 2006’s “Under the Skin” or last year’s home recorded “Seeds We Sow”. “Cast Away Dreams” started the evening off peacefully enough with delicate finger picking and yearning lyrics. “Bleed to Love Her” ended with a very long solo that got the audience primed to rock. When Buckingam performed “Not Too Late” his constant picking pattern became almost a pure glissando as he ruminated about his solo career in comparison to belonging to Fleetwood Mac.