Update: Stevie Nicks Performs Tonight & Saturday in Washington at A Celebration of Science 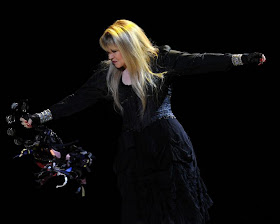 A CELEBRATION OF SCIENCE

"Stevie will sing one song Friday night at the Dinner event at the National Portrait Gallery and then sing four songs Saturday at the Gala event at the Kennedy Center. She was spotted last night having dinner with her assistant, hair and make up girl at a restaurant in Georgetown."

The Celebration of Science, September 7-9 in Washington, DC, will be an intensive three days focused on jumpstarting a new era of scientific discovery. We'll highlight the economic and social benefits of scientific research and how it improves lives around the world.

An unforgettable special evening at the Kennedy Center for the Performing Arts hosted by Whoopi Goldberg and John O'Hurley. We'll recognize scientists and public figures whose work has changed the world, hear inspiring patient stories, and enjoy performances by popular entertainers and an ensemble of musically gifted "Entertainers of Science."
Nickslive at Friday, September 07, 2012
Share