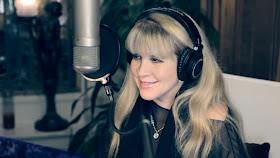 Program Notes
With her bewitching, emotionally charged songs—from “Rhiannon” to “Landslide”, “Dreams” to “Gypsy”—singer/songwriter Stevie Nicks cemented her status as one of the most distinctive female voices in rock history as a member of Fleetwood Mac and through her own solo career. Among her extraordinary accomplishments: over 40 Top 50 hits, 13 Grammy Award nominations, a member of the Rock and Roll Hall of Fame in 1998 with Fleetwood Mac, over 140 million albums sold, and a repertoire that has inspired a generation of artist, songwriters, and performers. In 2012, she now steps behind the camera with another rock legend Dave Stewart (the Eurythmics) with IN YOUR DREAMS – STEVIE NICKS, a behind-the-scenes look at the making of their 2011 album. Join us for a lively conversation with one of rock music’s most distinctive voices.

IN YOUR DREAMS screens on Sunday at Sag Harbor Cinemas.  The conversation with Stevie precedes the screening.