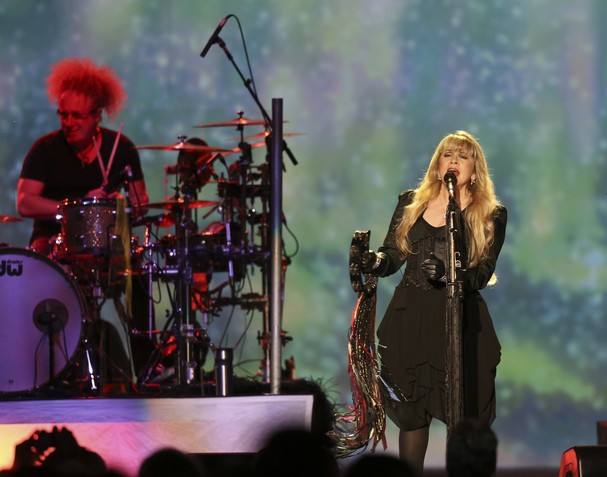 ESTERO — Stevie Nicks called the final stop of her “In Your Dreams” tour bittersweet.

For her fans, the two-hour performance Thursday night at Germain Arena was just sweet.

Nicks didn’t sell out the 5,000-seat venue, but her vintage voice filled the void for the baby boomer-centric crowd. She might be 64, but her classic hits and signature sound never get old.

With her sing-along lyrics, trademark melodies, a handful of new tracks off her latest album and stories behind the songs, Nicks proved why she’s a legend. She also proved sequins, shawls, flowing black outfits and long blonde hair never go out of style.

She ended the two-summer tour with “Love Is,” as she explained, a customary piano ballad encore. And then she professed her love for creating new music, touring and her faithful fans.

“I’m going to leave my heart here,” Nicks said right before her final bow. “I look forward to some rest, but I am going to miss singing some of these new songs.”

Nicks started out the show by slaying Led Zepplin’s “Rock and Roll.” With a montage of rock legends from the Rolling Stones to Paul McCartney flashing on the video screen behind her, the Fleetwood Mac frontwoman fit right in.

She was stuck in the ‘70s and that’s not bad. It was a pretty good decade for the singer-songwriter. And when the band went silent for the final lonely lonely lonely lonely time, Nicks’ unmistakable voice popped, showing she can still rock after 40 years in the business.

Her vocals matched the long, gold chain around her neck and the shimmering silver bangles on her wrists as she rattled off her repertoire of chart-topping hits and peppered in a few new songs along the way.

And for every hit she had a story.

She said she was proud of writing Fleetwood Mac’s only No. 1 song just before belting out “Dreams.”

She showed off a gold-dotted shawl after singing “Stand Back,” stating that it was the original garment worn in the 1985 MTV video.

She stripped-down the beginning of “Rhiannon” and then told the crowd she wrote it back in 1973, two years before joining Fleetwood Mac.

(I love the little dance she does at the 4:20 mark where she spins around)

She said 1973 was a great year for her as she wrote many hits that year.

She recalled sitting on the floor of a cabin in Aspen, Colo., in that same year. Back when, as she said, she wore platform shoes, had big curly hair and the perfect life. She asked to be left alone to write and immediately knew she had a future hit after finishing.

“I remember saying, ‘I think there is something to this song,’” Nicks said. “This little song turned into a ‘Landslide.’”

And for every new song she had a story.

EDGE OF SEVENTEEN
Continue to the full review

Pre-show music: Stevie Nicks singing Not Fade Away a Buddy Holly cover found on the album Listen To "Me (Buddy Holly Tribute)" released in 2011. 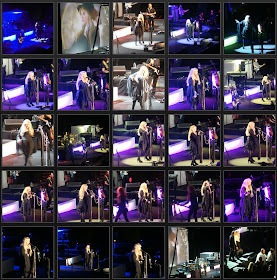 Nicks said a visit to wounded soldiers at Walter Reed hospital in Washington, D.C., inspired a poem that eventually turned into the song “Soldier’s Angel,” a haunting tribute to the troops.

She explained she was a Twi-hard, a fan of the "Twilight" movie series, which explains her black-on-black vampire-esque wardrobe. She said she was in Australia at a theater watching the second installment of the 'Twilight' saga when she had an idea for a song. “Moonlight (A Vampire’s Dream)” would give new light on her career. It motivated her to go back to the studio after an eight-year hiatus.

“In 2001, after recording ‘Trouble in Shangri-La,’ I gave up on the record business,” Nicks said. “I had enough, but this song brought me back.”

The song turned into an album and the album turned into the tour. She said it would be her final big-show solo tour. She sounded sad as she introduced her band and backup singers, many of whom had been with her for the 40-year journey, for one last time.

Fortunately for the fans, Nicks announced this summer that she would join Lindsey Buckingham and Mick Fleetwood on a Fleetwood Mac Tour in 2013.

There’s no doubt she’ll soar, as she did Thursday night, at times twirling on stage with arms extended and the array of shawls acting like a cape. She ended her final set soaring like a dove with a perfect rendition of “Edge of Seventeen.”

And then Nicks made a final victory lap on the edge of the stage, literally reaching out and touching her fans.

She thanked them for embracing her new music and “an artist who is progressing and not vanishing into the past.”
Nickslive at Friday, September 28, 2012
Share