Couldn't resist posting these two live shots that @GigiGanatra posted on Twitter.. Simply amazing especially this first one!  Great capture during Rhiannon of Stevie tonight in St. Petersburg at The Mahaffey Theater. 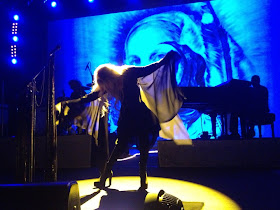 It looks like fans were treated with the full on setlist tonight (minus "Ghosts Are Gone") which based on the photo below doesn't look like it made it tonight!  Another change up tonight, is the dress and boots!  Stevie's back to the layered (I don't know what you call it) type of dress, switching out of the frilly ruffled one. And those boots look a little different in the heel..thinner and higher.

Thanks to @FleurDeBrie for taking a snapshot of the setlist! and to @GigiGanatra for the two stunning shots!  And to @dreamsunwind725 for the disclaimer. 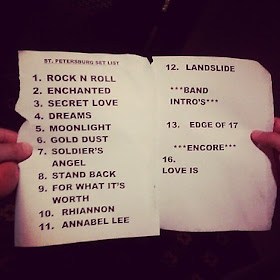 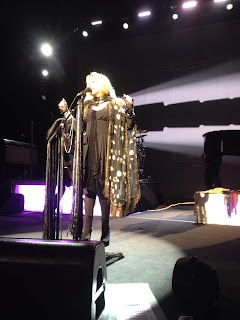 OWN NETWORK Rumour Update:
A few days ago Tampabay.com printed online that Oprah's Own Network were rumoured to be coming to the show tonight to film segments of the show for an upcoming project for the OWN Network... Well according to @dreamsunwind725 on Twitter there definitely was a camera crew at the show tonight filming.  Brittany said: 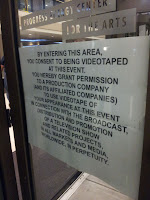 "two cameramen were out tonight & there was a disclaimer on the door that the concert was taped for television purposes."

She went on to say that,

"most of the show was taped from the front few rows & side of stage. Everytime Stevie walked out camera followed."

So this is pretty cool, exciting and something new to look forward to!... Whatever Oprah and her Team put together on Stevie I'm sure it'll be amazing and classy and I look forward to seeing it!

@SteviesSara reminded me of the original Tweet that got this whole ball rolling with the OWN Network with this ReTweet from OWN President Sheri Salata:

Thanks to everyone tonight for the info and pics tonight...  Next stop St. Augustine tomorrow night.  Just a few tickets left here.