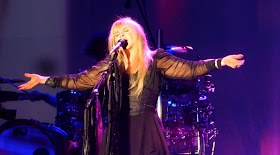 Bob Kraft has been a loyal and generous supporter of the Foundation for many years, both personally and through the Robert and Myra Kraft Family Foundation.

As Chairman, CEO, and Founder of Neuro, and as a private philanthropist, Diana Jenkins has been a wonderful patron of EJAF's work and events in the U.S. and in the U.K. Likewise, Joseph Blount has also been an ardent benefactor of the Foundation since its inception.

This year, Elton welcomes the incomparable Stevie Nicks as his special musical guest for An Enduring Vision. As a member of Fleetwood Mac, whose "Rumours" album was one of the biggest selling albums of all time, Stevie Nicks' extraordinary career includes multiple Grammy awards, numerous gold and platinum records, induction into the prestigious Rock and Roll Hall of Fame, and unforgettable performances across the stages of the world for over three decades. Nicks, who has penned Fleetwood Mac classics including the timeless "Landslide," "Dreams," "Gold Dust Woman" and "Rhiannon," has had equal success as a solo artist beginning with her five times platinum debut "Bella Donna." With unforgettable songs such as "Edge of Seventeen" and "Stand Back," Stevie Nicks is unique among the pantheon of rock icons. Her new album, "In Your Dreams," was co-produced by former Eurhythmic Dave Stewart and Glen Ballard.

Nicks has been touring the last year and a half with her "In Your Dreams" Tour and has also appeared with Rod Stewart on the "Heart & Soul" Tour. The Gold Dust Woman is also completing work on a documentary on the making of "In Your Dreams," which will be released at the end of this year.

2012 marks the 20th year since the establishment of the Elton John AIDS Foundation.

The 2011 An Enduring Vision event raised $2 million, which helped EJAF continue serving as one of the leading grant makers addressing the HIV prevention and treatment needs of populations most at risk of HIV infection and most in need of EJAF's help because they exist at the margins of society.

About EJAFThe Elton John AIDS Foundation (EJAF) was established as a nonprofit organization in the United States in 1992 and as a registered charity in the United Kingdom in 1993 by Sir Elton John. Together, both entities have raised more than $275 million for worthy programs in 55 countries around the globe since inception. Today, the Foundation is one of the world's leading nonprofit HIV/AIDS organizations supporting innovative HIV prevention programs, efforts to eliminate stigma and discrimination associated with HIV/AIDS, and direct care and support services for people living with HIV/AIDS. The U.S. organization's current grant-making priorities target HIV prevention programs throughout the United States, the Americas, and the Caribbean; HIV prevention and care services for highly marginalized and vulnerable populations; and HIV/AIDS prevention education and the promotion of sexual health for adolescents. For more information, please visit