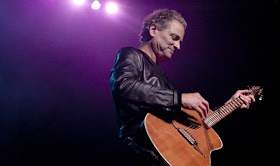 Lindsey Buckingham has been traveling throughout the U.S. this year playing intimate, unplugged concerts in support of his 2011 solo album, Seeds We Sow.  Now, the Fleetwood Mac singer/guitarist is set to release one of these performances as a digital download.  Lindsey Buckingham: One Man Show, will be available via iTunes on November 13, and will be the veteran artist's first recording documenting one of his solo acoustic gigs.  The album was recorded at a September 1 show that was held at Hoyt Sherman Place in Des Moines, Iowa.

"This performance is from a single night in Des Moines…taken right off the console mix, with a couple of room mikes added in," Buckingham says about the album.  "It's live and raw, with no post-production.  I love it!  It captures not only the spirit of the performance, but also the spirit of where I now live as an artist."

The 13-song recording captures Buckingham playing various selections from solo catalog, including "Go Insane" and Trouble," as well as Fleetwood Mac classics like "Go Your Own Way" and "Never Going Back Again."

Buckingham will hit the road for a new series of U.S. solo acoustic shows starting November 3 in Oklahoma City.  Visit LindseyBuckingham.com to check out all of his upcoming tour dates.