Video Below: Stevie comes in about the .46 second mark

Stevie Nicks was the performer at the Elton John AIDS Foundation’s Enduring Vision gala on Monday in Manhattan, and M.C. Anderson Cooper was stoked. “I have to warn you that I’ve got my big hat with a feather, I’ve got tambourines, I’ve got my wind machines. I’ve got a white bird back there. I am so ready for whatever Miss Stevie Nicks brings tonight,” Cooper told the crowd in his opening remarks.

Cooper wasn’t the only one. “She’s right there,” Courtney Love whispered to VF Daily as Nicks walked by. “Can you smell the God-ness?”

“Stevie Nicks got me through high school,” Sandra Lee told us. “The Bella Donna album was, like, my anthem.”

Before taking the stage, Elton told us that he had personally invited Nicks to perform at the gala. “I’ve always loved Stevie, and I’ve known her for a long time,” he said. “I think we used to hang out and do drugs together, many, many years ago, if I can remember when Tusk came out,” he added, laughing.

Nicks took over for an hour-long set of her biggest hits, including “Rhiannon,” “Dreams,” and “Gold Dust.” The formally dressed crowd at Cipriani was on its feet, singing along. When she sang “Landslide,” couples started slow dancing. Nicks did her trademark moves, hands in the air, swinging her gauzy shawl. After singing “Stand Back,” she held up her wrap, fringed, black with gold embroidery, and said, “This is the original ‘Stand Back’ cape from 1983. Ladies, you get what you pay for.”

“Stevie’s coming; it’s such a big deal,” Courtney Love said Monday night as she walked the rain-damp red carpet at Cipriani Wall Street at the Elton John AIDS Foundation’s Enduring Vision benefit. Love was speaking about Stevie Nicks. The Seventies rock siren would be performing later in the evening. The gala fund-raiser circuit is, of course, a playground to rock legends of a certain vintage, the evening’s namesake very much included, but Love seemed genuinely excited by the prospect of the Fleetwood Mac singer’s impending arrival. “We did this cover of ‘Gold Dust Woman’ that I’m really proud of,” she said of Hole’s 1996 reinterpretation of the “Rumours” standard. “It really helped her financially at the time. Well, whatever, it did really well.…And so I’m really proud of that. I’d like to see her.…[It’s been] seven years. Do you think she’ll recognize me?” Nicks walked by the press line shortly thereafter, eschewing print reporters for a rendezvous with a crowd inside that included John and partner David Furnish, Brooke Shields, Matt Lauer, Julian Schnabel and Anderson Cooper, who played emcee for a sixth consecutive year. All told, the night raised $2 million for John’s AIDS charity, much of which came at a post-dinner auction that featured a pair of Warhols. Shortly after the last lot moved, Nicks took the stage with her band as white-jacketed waiters passed coffee and dessert. Sitting at a table slightly removed from the stage, Love donned a pair of eyeglasses as she took in the performance.

Elton and Stevie pictured below.  Check out Getty Images for more shots of the red carpet and of Stevie performing.  Photos by: Dimitrios Kambouris, Carlo Allegri, Kevin Mazur.

Courtney Love backstage with Stevie.  Bet it's been awhile since these two saw one other.  They both look great!!  Stevie even travels with her favorite chair! 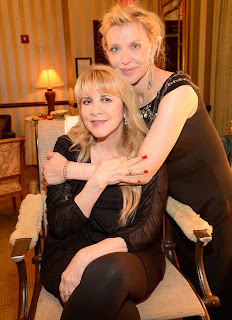 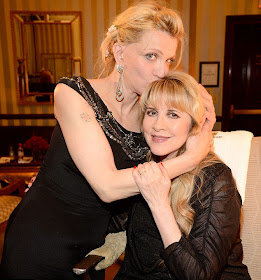 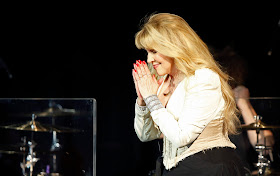 "I think we used to hang out and do drugs together many years ago – if I could remember when [Fleetwood Mac's] Tusk came out," joked John, arriving at Cipriani Wall Street with his partner, David Furnish, under sheets of pouring rain. "We've never asked her to do anything. The last few years, we've had R&B performers, and they've been brilliant. We thought, let's just go the other way this year and ask Stevie, and she said yes, so we're so thrilled."

Nicks closed out the night with a rousing, hour-long set of material both old and new. Caressing a mic stand adorned with swinging gold chains, the Fleetwood Mac frontwoman performed "Soldier's Angel," dedicating the track to John's AIDS efforts.

"I started going to visit the soldiers at Bethesda from 2005," Nicks said. "Elton is a soldier's angel too, for AIDS, because we wouldn't get anything done without him." Nicks also took a stroll down memory lane with "Stand Back," "Rhiannon," "Dreams" and "Gold Dust Woman." She slowed her pace for "Landslide," calling the song "the foundation of [Fleetwood Mac's] whole career" before revving back up for the closer "Edge of Seventeen." It was a raucous end to the evening, with tambourines shaking and uneaten slices of cake left behind.

Earlier in the night, Love told Rolling Stone she was excited to see Nicks perform for the first time in seven years. "When I was a little girl, I grew up on Elton and I grew up on Stevie," said Love. "I’m really excited to be here."

Full article with a nice shot of Stevie, Elton and David at Rolling Stone 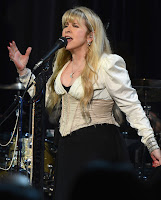 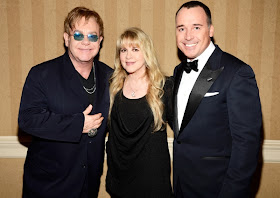 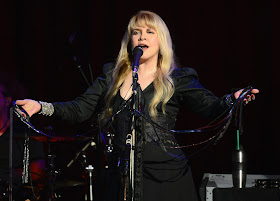 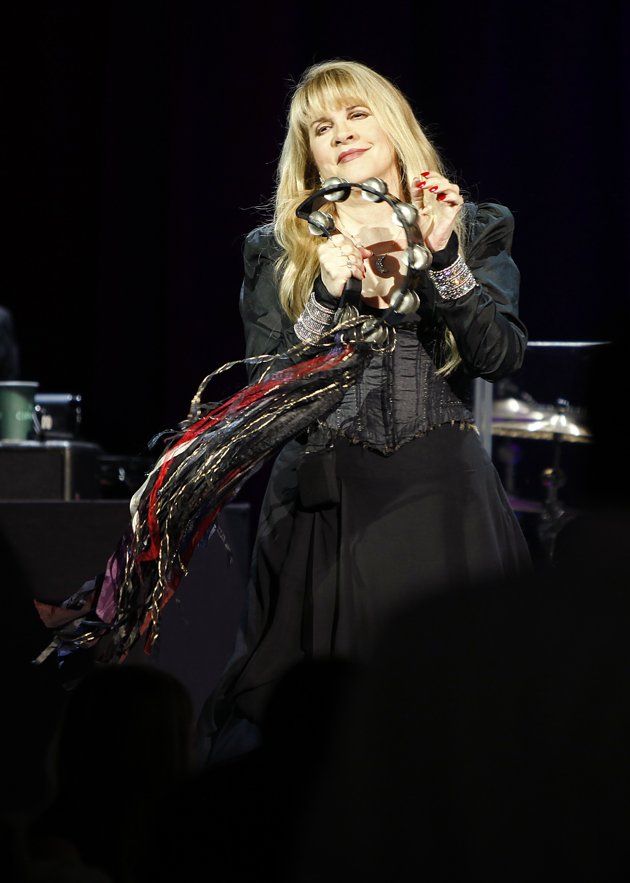 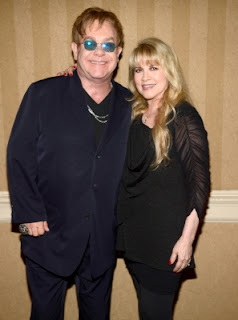