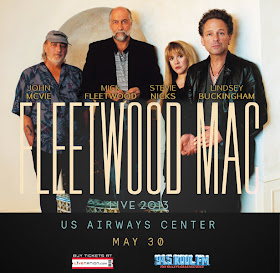 Mick Chats about the tour... His new restaurant in Maui and his daughters.

Check it out at Kool FM

All weekend long, they are giving you a chance to win tickets to see Fleetwood Mac on Wednesday,  June 12th at the Joe Louis Arena!

This Sunday, December 16th at 8:00pm with Robin Larose on Vancouver's Classic Rock101FM. Exclusive interviews, music etc. Listen on-line at http://rock101.com.  You can also register with the station and and vote for the Top 101 Classic Rock Songs of All Time and be entered to win Fleetwood Mac tickets for the Vancouver show.
Nickslive at Friday, December 14, 2012
Share