No fewer than 38 different songs were performed during the concert, in which Dave Grohl was the only musician to be onstage for each one of those 38. 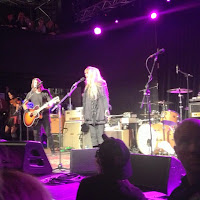 It was the rare concert that only got better the longer it went on, with a set by John Fogerty and then a set from Stevie Nicks closing the show (with Foo Fighters backing them up as primarily the house band for the evening, with several line-up changes).

The finale came when Steve Nicks came onstage, with one of the strongest connections to the Los Angeles studio that Grohl has immortalized in his film. (She and Lindsey Buckingham recored as a duo at the studio before they joined Fleetwood Mac, whose "Rumours" was recorded at the studio.) Along with a new song destined for the "Sound City" soundtrack, she sang breath-taking versions of "Gold Dust Woman" (which closed the night, with 11 musicians on stage) and "Dreams," both off of the landmark album "Rumours." But best of all was when all of the other musicians except for Grohl left the stage, and he accompanied her on acoustic guitar as she sang "Landslide." Everyone in the audience who has an iPhone captured the performance (and it seemed as if every audience member owned the smart phone).

Besides being a party to celebrate the film, the night underscored the message of the film: that people making music with other people (as opposed to making music on a computer) is the only way to create magic, and there was magic throughout the evening. 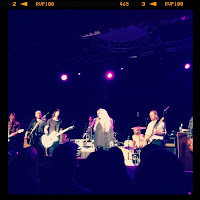 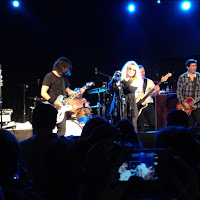 Did Dave Grohl Put On The Greatest Sundance Show Ever?
The Foo Fighters joined former members of Nirvana and Stevie Nicks for an epic Sound City Players performance in Park City, UT.


The crowd played favorites for the final performer of the night: Stevie Nicks. Introduced by Grohl as the "Queen of Rock and Roll," the Fleetwood Mac star was greeted by a sea of camera flashes and a new surge from the crowd. Nicks debuted a new song from the "Sound City" soundtrack about the death of her godson, a stalwart, octave-driven anthem called "You Can't Fix This." Nicks and the Foos then launched into a set of Fleetwood Mac hits, with Nicks bringing the night full circle by going back to her roots, citing "Landslide" as the song that made her the songwriter and performer that she is today.