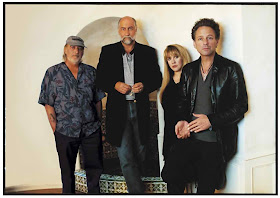 
LOS ANGELES, Jan. 24, 2013 /PRNewswire/ -- Based on an overwhelming response to the recently announced Fleetwood Mac Live 2013 North American tour, which has already sold over 325,000 tickets, the band announced today that they will be adding 13 shows.  The newly announced leg of the tour includes second shows in Chicago, Boston and Los Angeles, new stops in Cleveland, Wantagh, Charlotte, Des Moines, Spokane, Portland, Sacramento, Albany, as well as, Montreal, Canada. A complete itinerary follows this release.  Tickets for the second leg of the tour go on sale beginning February 1st at  Ticketmaster.com.

Fleetwood Mac Live 2013 begins in Columbus, Ohio at the Nationwide Arena on April 4th with confirmed dates through July 6th in Sacramento, California at the Sleep Train Arena.

The multi-Grammy winning Rock & Roll Hall of Fame inductees last toured in 2009 with the sold out Unleashed Tour.  The current lineup includes Mick Fleetwood and John McVie – both original members since l967, Lindsey Buckingham and Stevie Nicks who joined the band in l975.

In celebration of the 35th anniversary of the release of the iconic Rumours album and in conjunction with their Fleetwood Mac Live 2013 tour, Fleetwood Mac, one of rock's most enduring, beloved and successful bands will also be reissuing an expanded and deluxe version of Rumours on Rhino Records January 29th.  The expanded edition includes the original album, the b-side of "Silver Springs," a dozen unreleased live recordings from the group's l977 world tour and an entire disc filled with unreleased takes from the album's recording sessions. The deluxe edition will include all of the music from expanded edition, plus an additional disc of outtakes on DVD that feature "The Rosebud Film," a l977 documentary about the album, as well as the album on vinyl.  Digital versions will also be available.