35 years of Rumours: Will a reissue add to Fleetwood Mac’s classic album?
By STUART BATHGATE


It’s 35 years since the release of Rumours, but will yet another version add anything to the classic, asks Stuart Bathgate, or are reissues just a cynical ploy by record companies to capitalise on our memories?

YOU bought the record. You’ve got the CD. Perhaps, in the early days of the Walkman, you also had it on tape. All in all, you might well reckon you’ve done your bit by Rumours, Fleetwood Mac’s classic 1977 album. Bought it, bought it again, bought it a third time and given at least two versions to the charity shop. 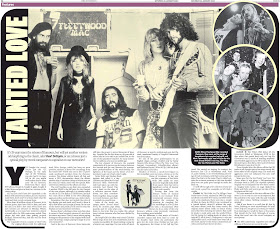 Ah, but you don’t have the expanded or the deluxe 35th anniversary edition, do you? And you want them, don’t you? Or at least, that’s what the band and their record company hope.

More than 40 million copies of Rumours, in its various guises, have been sold to date, and now the aim is to shift a few more when those two new versions are released on Monday. Which, incidentally, as you may have noticed, is almost a month after the 35th anniversary ended. They always did take their time getting projects finished, Fleetwood Mac, and this one has been no different.

Great article... Check out the rest at Scotsman.com

Fleetwood Mac: Rumour has it
The New Zealand Herald
By Scott Kara 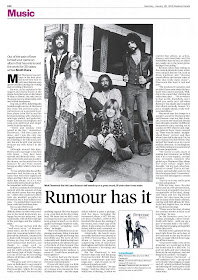 Out of the pain of love turned sour came an album that has entranced the world for 35 years, writes Scott Kara


Mick Fleetwood was perhaps in the best position to see how rock 'n' roll's most famous soap opera unfolded during the writing and recording of Rumours.

He was, as he explains in his dapper and chatty drawl on the phone from his home on the island of Maui in Hawaii, the only one in the group not in a relationship with one of their bandmates.

This article is also a full page spread in the January 26th issue. 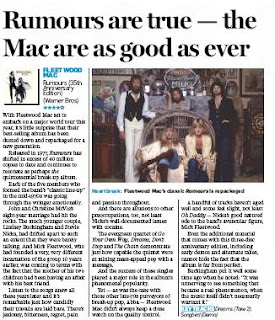 
With Fleetwood Mac set to embark on a major world tour this year, it’s little surprise that their best-selling album has been dusted down and repackaged for a new generation.

Released in 1977, Rumours has shifted in excess of 40 million copies to date and continues to resonate as perhaps the quintessential break-up album.

Each of the five members who formed the band’s “classic line-up” in the mid-1970s was going through the wringer emotionally. John and Christine McVie’s eight-year marriage had hit the rocks. The much younger couple, Lindsey Buckingham and Stevie Nicks, had drifted apart to such an extent that they were barely talking. And Mick Fleetwood, who had founded a very, very different incarnation of the group 10 years earlier, was coming to terms with the fact that the mother of his two children had been having an affair with his best friend.

Listen to the songs anew all these years later and it’s remarkable just how candidly their travails are laid bare. There’s jealousy, bitterness, regret, pain and passion throughout.

And there are allusions to other preoccupations, too, not least Nicks’s well-documented issues with cocaine.

The evergreen quartet of Go Your Own Way, Dreams, Don’t Stop and The Chain demonstrate just how capable the quintet were at mining mass-appeal pop with a message.

And the success of these singles played a major role in the album’s phenomenal popularity.

Yet — as was the case with those other late-70s purveyors of break-up pop, Abba — Fleetwood Mac didn’t always keep a close watch on the quality control. A handful of tracks haven’t aged well and some feel slight, not least Oh Daddy — McVie's good natured ode to the band’s avuncular figure, Mick Fleetwood.

Even the additional material that comes with this three-disc anniversary edition, including early demos and alternate takes, cannot hide the fact that the album is far from perfect.

Buckingham put it well some time ago when he noted: “It was unnerving to see something that became a real phenomenon, when the music itself didn't necessarily warrant it.”