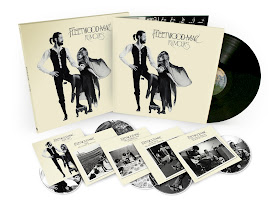 Today, 35 years on, an anniversary box set of “Rumours” shows how the musical cocktail of two women and three men was shaken and stirred by their romantic splits. Newly released material shows the tracks getting endlessly reworked and improved as they squabbled.

It was a “crucifyingly difficult” process, drummer Mick Fleetwood notes. He was going through a divorce, with his wife dating his best friend. He never imagined the chaos would lead to a 40-million-selling LP: the best of 1977, according to the Grammy judges, and one of the finest efforts of the 1970s, maybe even of all time.

The American couple in the band added a pop edge to British blues. Californian Lindsey Buckingham had been inseparable from his singer girlfriend Stevie Nicks for five years. When Fleetwood asked him to join, Buckingham insisted she be included too. Now they were all arguing, and the frustrated guitarist started writing a bitter rant called “Strummer.”

On the box set, we hear how this evolved from a simple acoustic demo into a Celtic rag and finally a sleek piece of disco with hints of the Bee Gees, retitled “Second Hand News.” There’s a percussive roll which, it now turns out, was made by bashing an old Naughahyde chair near the mixing desk.

Buckingham throws the opening words at his ex: “I know there’s nothing to say, someone has taken my place.” (Nicks was romantically linked to Don Henley of the Eagles, then Fleetwood himself.)

Her own breakup lyric “Dreams” is a swift rejoinder: “Now here you go again, you say you want your freedom.” The song’s first mix, nowhere near so radio-friendly, puts her voice starkly to the fore and buries its optimism.

This creative jousting inevitably leads to Buckingham replying, bluntly inviting her to “Go Your Own Way” because he was “Never Going Back Again.”

The band’s other couple, the McVies, were walking from the wreckage of an eight-year marriage. They were on such bad terms that they would only speak about music.

Christine McVie defiantly shows how she’s moved on with “Don’t Stop” about her on-tour romance with the band’s lighting director. “You Making Loving Fun” tells her husband that her new flame is much better.

Coproducer Ken Caillat recalls how huge rows in the Sausalito, California studio would be followed minutes later by the composition of sweet harmonies. He deserves credit for singling out the most tender ballad, “Songbird,” and taking it somewhere else -- more precisely, to the Zellerbach Auditorium, Berkeley, which had the right acoustic and a Steinway piano.

When the LP came out, I was a very young punk bassist and hated it, of course. This expensively produced, sentimental mush was exactly the stuff we were rebelling against. Just a few years on and I got it. “Songbird” now moves me every time. The record’s soft rock has echoes in acts such as Sting, Heart, Kelly Clarkson and Neko Case, to name just four.

The creative madness which had threatened to sink records as varied as “Exile on Main Street,” “Pet Sounds” and “Station to Station” again resulted in an act coming out with its best. Miracles do happen. As the lyric has it, “thunder only happens when it’s raining.”

The album is available on Warner as a remaster; a 3-CD version including the original album, bonus tracks and live material ($16); and a box with further outtakes, a DVD and a vinyl LP ($86). Rating: ***** for the shorter versions; *** for the large box because it’s too much for all but the most dedicated fans.

It's 35 years after the release of Fleetwood Mac's groundbreaking album "Rumours," and Stevie Nicks and Lindsey Buckingham are holding hands.

Maybe it's true that absence makes the heart grow fonder. Or maybe it's a put-on, knowing that fans are still intrigued by the complicated interpersonal drama that drives the band.

"Rumours" gave listeners a voyeuristic peek into the messy romantic lives of the quintet. "Go Your Own Way" was Buckingham's anguished kiss-off to Nicks. "Don't Stop" was Christine McVie's song of encouragement to her soon-to-be ex-husband, John McVie.

A special anniversary reissue of "Rumours" is now available, with expanded and deluxe versions featuring previously unreleased demos and early takes, along with a dozen live recordings from the group's 1977 world tour.

In April, Nicks and Buckingham will join drummer Mick Fleetwood and bassist John McVie for their first tour in three years. In addition to their arsenal of beloved hits, they're hoping to crowd-test three newly recorded tracks.

The "old" tune predates Fleetwood Mac: an unreleased nugget written for the "Buckingham Nicks" LP, which marks its 40th anniversary this year.

The two "new" tracks were penned by Buckingham. Last year, he went into the studio with Fleetwood and McVie to record eight songs they hoped would become the catalyst for a new Fleetwood Mac album. But Nicks had reservations.

"We really didn't want to rent a house for a year and then make a whole record with 13, 14, 15 songs on it, then have most of the people who are thinking about buying it buy one song," she explained. "So we did the three songs, and we'll see how the world reacts to that. If they love those three songs, then maybe they might talk us into doing something else."

Maybe Nicks and Buckingham's hand-holding isn't for the cameras. Maybe it's to remind each other that despite their differences, they remain personally supportive and unified in their commitment to the juggernaut that is Fleetwood Mac -- even if it means playing mostly vintage hits for their upcoming tour.
"That's okay," Buckingham conceded. "That's part and parcel with what we do."

"We laugh," added Nicks, "but (the classics are) why we all have a beautiful house."