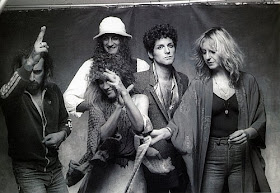 In Hear This, A.V. Club writers sing the praises of songs they know well—some inspired by a weekly theme and some not, but always songs worth hearing.

For most of Fleetwood Mac’s life, the band has been a hits machine, and it used that reputation to propel a singularly weird song—one vastly different from its usual output—into the Billboard top 10 in 1979. “Tusk,” which is featured prominently and often in the première of FX’s The Americans tonight, is a work of strange savagery, overlaid with jungle sounds and a thudding, endlessly repetitive drum riff that drives everything that happens in the song. The lyrics are simple enough to be a Dr. Seuss exploration of a relationship that’s crumbling, Lindsey Buckingham softly crooning “Why don’t you ask him if he going to stay? / Why don’t you ask him if he’s going away?” over the horrors building up beneath him.