Mick Fleetwood on his way to the UK... Fleetwood Mac & Rumours Promo Junket

Mick Fleetwood is on his way to the UK!  He was spotted yesterday at LAX in Los Angeles with his Manager Carl Stubner prepping to board a flight heading east.  More photos here.  MediaEye confirmed on Twitter he's headed that way:

Mick Fleetwood flies in from the US today to promote the re-release of Fleetwood Mac's chart-topping album Rumours. #music
— The Media Eye(@MediaEyeTweets) January 25, 2013

"I’m really looking forward to reconnecting with my sister, Christine McVie, and that’s sort of a lovely, nice thing to be doing. Getting her out of the English cold there for a few weeks... and me and Chris will be flying back [to Mick’s home in Hawaii] after my work in London”.

Darren asked Mick if Christine would be with them for their shows in the UK and Mick went on to say,

"I would love that and I would welcome that as we all would and I truly hope that happens. And it might just be the case and I will take that to the fore and be reminded that a lot of people would love to see that happen. It would be an emotionally charged moment that would be lovely to have happen. And I know everyone in the band would welcome that. So you never know!”. 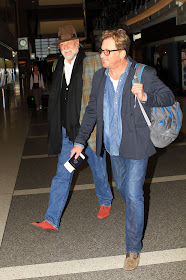