Here are some early shots from the night thanks to attendees, their smarty phones, Instagram and Twitter:  Photos by: Kate OHare, Deva Kehoe, Kristen Kee, Leah Ashley - Thanks ladies!

Lady Antebellum taped their CMT Crossroads performance with Stevie Nicks Tuesday night in Los Angeles
The show will premiere in the coming months.  While in town for the taping, Lady A is also getting some serious hang time with the rock legend.

The group's Charles Kelley says, "She invited us to her house one night.  So, we're gonna go hang out with her at her house, which I'm gonna die."

It was actually Stevie's idea to do the CMT Crossroads with Lady Antebellum, and they all hopped on a conference call a few weeks back to prepare the show.  The members of Lady A were floored that Stevie is a big fan of their music.  Hillary Scott , who is expecting her first child in July, was very taken with Stevie's spirit in that call.

"I joked, and I'm kind of not kidding, with my husband when I got home after the phone call, I said, 'I really kinda want her to be the honorary godmother of our child,'" Hillary says with a laughs.  "She was just this amazing presence and person to talk to."

Charles cut his musical teeth on Stevie's classic album with her band Fleetwood Mac , Rumours .  He discovered the LP in his parents' record collection, and Charles says, "I just was like, 'Oh my gosh.  Who in the world are these guys?'  Just played it over and over in my room."

Charles adds that performing this show with Stevie Nicks is a real full circle moment for him.  We'll keep you posted when CMT announces an airdate for this installment of Crossroads . 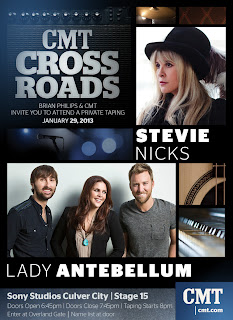 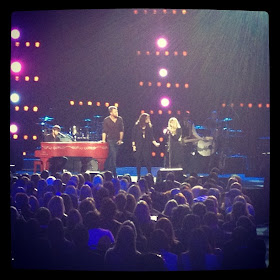 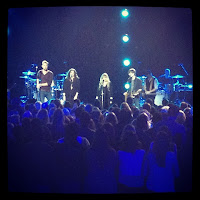 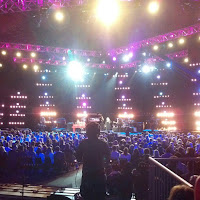 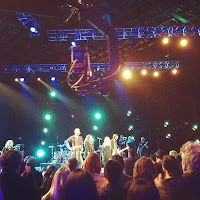 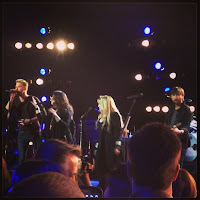 When rock icon Stevie Nicks and country trio Lady Antebellum convened at L.A.'s Sony Pictures Studios Tuesday to tape an upcoming episode of CMT's Crossroads, the most excited people in the room of a thousand or so were clearly Nicks and the Nashville trio.

In fact, it was hard to tell who was the bigger fan, with both consistently praising the other's work. It started from the very outset: after Nicks apologized for flubbing the opening lines of Lady Antebellum's "Love Don't Live Here," Charles Kelley let her know all was forgiven by shouting "Stevie Fucking Nicks!"

Though no one in the audience seemed to mind starting off with five Lady Antebellum songs, Kelley commented at least three times on the format: "You're gonna have to suffer through a few Lady A songs first," he joked.

Nicks certainly did not mind. She told the audience she spent three months listening to the band's songs in preparation for this show. "These songs are amazing," she said. "These songs make you feel like you're in love."

Her biggest praise came for the new ballad "Golden," a song that Kelley explained is on their forthcoming album, which they sent to Nicks in hope of doing it on this night. She said that after a half a minute of listening to the song she was crying. She called it "their 'Landslide.'" To which Kelley responded, "Now we might cry."

When a piano was rolled out, while Kelley was tinkering around with Billy Joel's "New York State of Mind," Nicks hung over the piano. "This is every man's fantasy – Stevie Nicks draped over a piano," he said. "I would like a picture of this."

After Nicks left the stage for the upbeat "Downtown," she and her band returned for her turn. Kelley let everyone know the cultural significance of these songs by introducing "Gold Dust Woman": "If you don't know this next song, you suck."

Swept up in the night, Kelley had several humorous moments, from his attempt at the trademark Nicks twirl to recounting listening to Fleetwood Mac records in his bedroom at age 10. "Now we're hanging out. We're besties," he quipped.

Maybe they're not besties yet, though Nicks did tell the audience she had gifts backstage for Lady Antebellum's pregnant frontwoman, Hillary Scott. "Edge of Seventeen," one of her biggest solo hits, is a song she doesn't like to share with anybody because it is so personal, she said.

"I'm proud to share it with Lady Antebellum, because they're good enough to do it," she said.

Nicks took the time to recall the stories behind each of her songs, like how she wrote "Landslide" in Aspen, Colorado in 1973 and how she felt "a twinge of something, that this song is gonna be super-important in my life." She called it "the foundation of Fleetwood Mac," while Kelley called it "the greatest song ever." After a sublime rendition, Scott said, "Makes me cry every time."

Before a raucous "Stop Dragging My Heart Around," a song she originally performed with Tom Petty, Nicks told of producer Jimmy Iovine's insistence on finding a single for her debut solo album, Bella Donna. If it hadn't been for that demand, she said, she might not have had a solo career. She learned a lesson, she said, about listening to others and not letting pride get in the way. To which Kelly added, "Every person at our label has a huge smile right now." So did everyone in the venue by the time they finished "Rhiannon." 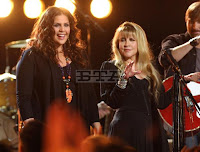