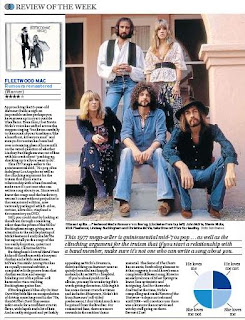 
"If you're already sold on the album, you may be wondering if it's worth getting the extras. Although it has some decent crunch at times and includes Rhiannon, Nicks's hit from Rumours' self-titled predecessor, I don't think much is to be gained from the live disc. For committed fans, there are more rewards in the rarities/demo material. The demo of The Chain has an eerie, foreboding element to it that suggests it could have been a completely different song; likewise an early version of Silver Springs is lower, less optimistic and intriguing. And for those who doubted at the time, Nicks's compelling and stark Planets of the Universe - a demo not released until 2004 - will convince you there was a lot more than scarves and witchy stuff going on there."

Much more to this review at SMH.com