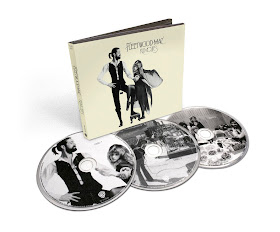 Reviewed by: Scott McLennan
Rip It Up


Infamously recorded amid a blur of incestuous bandmate rooting and powder caches to rival Guy Fawkes’ stash, Rumours’ remarkable tracks outshine the tumultuous tales of their creation even 35 years on.

Rumours sits firmly in the top 10 selling albums of all time for good reason. Despite its familiarity, each track remains as magnificent as a full moon setting over a lake. Many of the tunes have been reimagined, recontextualised or granted new life by entertainers as diverse as Hole (post-Kurt), Bill Clinton (post-election victory) and Eva Cassidy (post-mortem) over the last three decades, but none can recreate the divergent conflagrations that rage on the original.

Whether fuelled by the wisdom of Christine McVie, the ethereal gossamer whirls of Stevie Nicks or the vengeful snarl of Lindsey Buckingham, the power of The Chain, Go Your Own Way and Songbird remain staggering. Although the live disc here offers little in the way of divergence to pique the senses (save a hint of the then-forthcoming Tusk and a few flat vocals from Nicks on Don’t Stop), the lost tracks deliver raw insight.

A pivotal counterpoint to the punk forces brewing on the other side of the Atlantic, Rumours remains a multi-faceted snapshot of the ‘70s – equal parts dreamy Hollywood Boulevard flair and crumbling Sunset Boulevard tragedy.


Before I talk about the record, I have to ask this question. This iconic album has been re released a number of times. Digitally remastered, bonus tracks, demo tracks, live tracks, everything possible. So what more can they squeeze out with a "Super Deluxe Edition" that we haven't heard already? And is this just another example of a record label milking a cash cow dry?

But let's focus on the actual album itself. Rumours is by far one of the most talked about records in Fleetwood Mac's career. We know about the internal turmoil going through the band during the time of the writing and recording of this album. The love affairs, the fights, the massive drug addictions and of course the talented musicians that were lost in the haze of their personal lives. We know that when Rumours was released, it was one of those landmark albums that is still highly regarded today some 35 years after its release. All of those combustible elements internally led to a great record. And isn't that always the case. Adversity leads to the best music.

Rumours is centred around two massive singles. 'Don't Stop' and 'Go Your Own Way'. While the bands chief lyricists, Stevie Nicks, Christine McVie and Lindsey Buckingham worked independently on the lyrics for the songs not realising that they all shared a common theme of love gone wrong and moving on. It's the tracks that didn't receive the initial radio air play (which wasn't many as half the album were released as singles in the end) that are the most telling on that period of time. A song like 'Second Hand News' which relates to finding out second hand that a loved one is messing around or 'I Don't Want To Know' where you can hear the pain that the band members were feeling internally come out through the music. The band only wrote one song together on the album, the track 'The Chain', which I find to be the weakest of the tracks as it lacks the deep seeded emotion hidden in the other tracks. Nonetheless, the reason why this album worked so well was behind the seriousness of the themes, the music was glorious examples of pop inspired folk with upbeat major chords and a real positive flow in the music alone. A complete juxpostion to the lyrical content.

So how have they milked this one compared to the other re issues? A live set from the Rumours tour in 1978 plus out takes, demos and instrumentals from the recording session. Sadly nothing you couldn't have tracked down before or if not, you wouldn't have wanted to. The live set is of great quality and listening to it I got a touch of a feeling that if the reunion lasts and comes down to Australia, it will be truly amazing. The demos from the original recordings were nothing special and only hardcore fans might get something out of it but its just a marketing ploy to make you pay another $30 for an album you may already have. I'd save the money and just relistening to the Rumours album next month when this is released.

Both the 3CD and Super Deluxe editions are available for pre-order via Amazon or iTune.