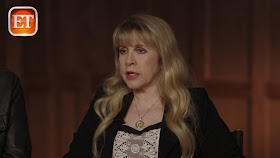 ETonline
After over four decades together, Fleetwood Mac is still thriving. The band is re-releasing their album Rumours and will soon be embarking on a newly expanded North American tour. Despite bumps along the way, lead singer Stevie Nicks partially credits the band's recent reconnection to her mother's passing.
Fleetwood Mac has been on many hiatuses throughout the years, which the band says has become an almost necessary cyclical process for them to break off and embark on solo endeavors amid spurts of recording and touring together.

A few years after the band wrapped its Unleashed tour, it is back together for another tour, which Nicks mainly credits to the passing of her mother, Barbara, in late 2011.

"My mom passed away a year and two months ago, so Lindsey (Buckingham, guitarist) and I have talked a lot about that," Nicks said in a sit-down with Buckingham and drummer Mick Fleetwood (bassist John McVie was not present).

"She was the last of the Old Guard, so it's been a little bit shocking for all of us, but I think in a strange sort of way it's kind of really reconnected us in a way because we miss her and we wish she wasn't gone. She loved Lindsey and she loved Mick, and she loved me. ...Losing Barbara has really, I think, brought us back together in a lot of ways."

While they've recently joined back together for the Fleetwood Mac Live 2013 tour--which was recently extended an additional twelve shows due to the high volume of demand for the shows-- Nicks, who has maintained a steady solo career over the years, divulged that it's only natural that the band will be on hiatus once again.

"It is like a marriage and if you're together 24 hours a day every single day, no matter how much you care about somebody, you need a break," she said. "So, we take that three-year break and it seems to work really beautifully for us."

In addition to the band's 2013 tour, it is also re-releasing its 1977 album Rumours, which has become one of the best-selling albums of all time with an astonishing 40 million estimated records sold. The reissued album will feature live recordings and previously unreleased music.

Watch the video to hear the band talk about the re-released edition of Rumours, which will be available January 29.
Nickslive at Thursday, January 24, 2013
Share