FLEETWOOD Mac’s loyal fans who registered on a ticket presales site are furious after being offered only single seats for their Glasgow gig.

The band line-up of Mick Fleetwood, John McVie, Stevie Nicks and Lindsey Buckingham will be among the first to grace the stage at new city venue The Hydro this autumn with their Rumours 35th anniversary tour. 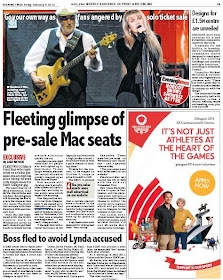 Fans who had registered with the Hydro website were on wednesday given an early chance to get their hands on tickets but the pre-sale allocation quickly ran out.

Another pre-sale, held yesterday for people who had signed up to distributor Ticket Soup’s website, also saw the second allocation quickly snapped up as keen fans swooped.

Now anyone still chasing much-soughtafter tickets will have to hope they are lucky in the public sale which began this morning.

one disgruntled music lover from Glasgow, said: “I am signed up to thehydro.com and I had hoped to be able to get a pair of tickets in the presale on wednesday but all that was available was single seats … I am really disappointed.

“I thought that with a venue that has a 12,000 capacity and with such a high profile concert I would have been in with a good chance of landing them.”

The SECC confirmed that a certain amount were allocated to the pre-sales and some held back for today’s general release but they would not confirm how many were up for grabs on each day.

A spokeswoman said demand for tickets had been “very strong”

She added: “There were two pre sales – on wednesday and Thursday – and a general release today.

Fleetwood Mac last toured the UK in 2009 with the sold-out Unleashed Tour.

New venue the Hydro is due to open in September and the showcase event will have a Commonwealth Games theme to reflect the spor ts extravaganza which will get under way in Glasgow in the summer of next year.