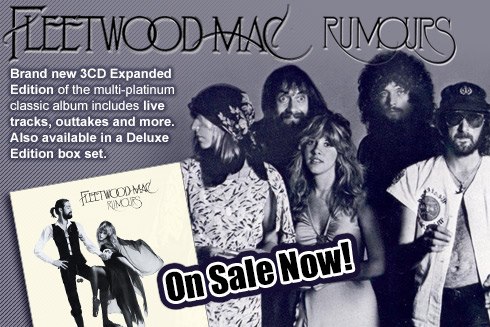 The number of physical units sold for the week were 6,090 with digital units making up the difference of 4,728.  The album is also #1 this week on the Top 200 Catalog Chart moving up from #94 last week.  Rumours has logged 31 weeks at #1 on Billboard's Top 200 Albums Chart and since 1956, only two albums have had longer runs on top: the West Side Story soundtrack (54 weeks) and Michael Jackson’s Thriller (37 weeks) according to Paul Grein at Yahoo Chart Watch. Rumours was also #5 on the Top Internet Albums Chart for the week.

The only thing I'm not sure of is whether the above Rumours charts and sales are for the 3CD reissue, the Deluxe Box, or is it just the normal Rumours album... OR is it all sales combined.