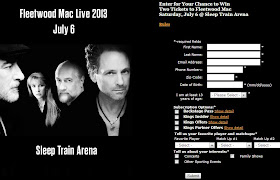 You might run into "trackerdan".  He posted on the Sleep Train website that he worked at Sound City during the recording of the first Fleetwood Mac album with Stevie and Lindsey and said the following:

"I was working in studio B at Sound City while they were recording their first album Rumours. Richard Dashit, Lindsey and I would have some tremendous jams in the wee hours of the morning after working all night. Those were the days. Looking forward to seeing them again."