AS Mick Fleetwood cheerfully admits, talking about Fleetwood Mac is like free therapy. The result is an unusually candid interview, tying in with the 35th anniversary re-release of the rock juggernaut that is Rumours, one of the bestselling albums in history. 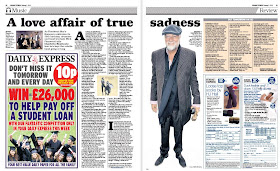 Its success is largely thanks to it being an almost perfect record and one strewn with classics; but much of its emotional intensity flowed from the well-documented romantic, drug-fuelled dramas playing out in the studio.

Stevie Nicks had ended her relationship with Lindsey Buckingham after five years (so Stevie aimed Dreams at Lindsey who retaliated with the bitter, brilliant Go Your Own Way); while Christine McVie was splitting from her husband John (and taunting him with a song about a fling, You Make Loving Fun). At the same time, Fleetwood was divorcing his own wife Jenny. Not enough heartache and tension for one band? Mick would complicate matters by embarking upon a two-year affair with Nicks.


It’s a miracle that Rumours got made. What stopped one or all of the band walking away without a backward glance? Even after all these years, it’s a subject that still has a hold on Fleetwood.

“We were emotionally unhappy, we were lovesick, all of us,” he says of the band’s recording sessions in 1976. “Upset by being out of love with someone. Every one of us was love-****ed-up.”

In explaining how they all hung in there, Fleetwood uses the analogy of divorcing parents determined to do the best for the children.

“Fleetwood Mac became like a child you couldn’t leave. We did the right thing. We did that with all the creativity and the chemistry that was worth saving, but it was really hard to do that.

“We had a great chemistry that was a gift to us. That’s what we hung on to because everything else had gone. We were all so unhappy and they were ex-lovers and having to work together. It’s an amazing story. You sit down and talk about things in your life and you go: ‘God, how did I get through that?’

“We were just a bunch of people doing our thing, we were lucky to do it and knew we were and we didn’t want to give it up and it was really hard for everyone.”

Another key reason for the band’s survival was Fleetwood’s own determination to save the band he originally formed in 1967. “I was the worrywart. Whatever happens, keep the band going, and that’s what I’ve done for over 40 years.

“I was right there ready to coerce someone or keep someone away like a mutant ringmaster of all the insecurity. ‘Pick her up!’ ‘He’s already left!’ ‘He’s going to come to the studio, it’s fine!’ We had all these subplots. And that became the template for the next great many years.”

Fleetwood implies that he needs the band a little more than his bandmates do. “I don’t write songs, I just find people to put in Fleetwood Mac and keep the band going,” he says wryly. However, while trying to get the band’s latest tour (kicking off in the US in April) off the ground, Fleetwood was so irritated by Nicks prioritising her solo tour over the band’s plans that he used a recent interview to express his frustration.

“We had our noses a little bit out of joint way back,” he admits.

“She said: ‘Wait,’ and I was fed up with waiting. You plan your life around what you’re doing and I went: ‘Well, I wish you’d told me.’ I was being a brat. So I said: ‘I don’t think Fleetwood Mac is going to work again. We may not ever do this.’”

It was only when this quote was endlessly fired at Nicks in her own interviews that Fleetwood finally got his answer: Fleetwood Mac would most definitely tour again. However, on balance, he thinks everything worked out for the best after using his downtime to fulfil a long-held dream and open a restaurant near his home in Maui, Hawaii. Fleetwood cannot, however, ask Christine McVie whether she might rejoin the band on stage. “I promised I’d never do that to her anymore. It’s not allowed. You can imagine how much I did that. A lot. She asked me to promise that I would never do that because it would break her heart.”

On the eve of the band’s first tour rehearsals, Fleetwood describes the dynamic as “great... We’re like lovers that can’t coexist but, when it’s right, it’s great. Ostensibly, it’s Stevie and Lindsey, are they OK?”

Buckingham, Mick says, harboured resentment at all the work he did on the songs that Nicks wrote for Rumours, emotionally investing too much in her when she had made it clear the relationship was over. However, to a great extent, those wounds largely healed over when Buckingham left the band for a decade from 1987.

In hindsight, Fleetwood thinks the group were naïve in releasing such an intensely personal record, unaware of how their private lives would be picked over. “If you’d asked us five to 10 years after the advent of all this huge continuing success, we’d have said we should have kept our mouths shut about all this private stuff. We’d go: ‘Aren’t you ever going to ask about the music? All you want to talk about is how many times I jumped into bed with Stevie.”

In the intervening years, he views it differently. “It’s way more real. People feel like they know you and it’s a good thing.” There is even talk of a new Fleetwood Mac album with three fresh tracks already awaiting release online.

However, since no albums shift 40 million copies these days, as Rumours did, Mick says that at his age (65), he’s not prepared to invest months on end into the project. He can live with that, though. “Touring is what we do.”

The expanded and deluxe editions of Rumours are out now (Warners). See fleetwoodmac.com for tour dates