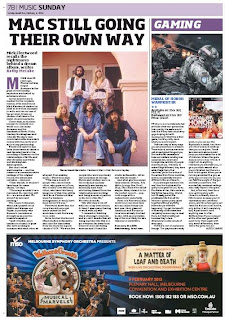 Rumours were all true
by Kathy McCabe
The Sunday Telegraph (Sydney, Australia)

MORE than 35 years ago, Fleetwood Mac forged Rumours in the grip of relationship implosion medicated by substance abuse.

As the anniversary is marked by the requisite reissue, even band founder Mick Fleetwood shakes his head at how they managed to write and record one of the greatest break-up albums of all time in the midst of such heartache.

These days, as the Mac prepare to embark on a world tour, the lanky drummer and his bandmates Stevie Nicks, Lindsey Buckingham and John McVie share that comfortable affection which comes with the survival of such a long marriage.

Fleetwood says it has been bittersweet at times to cast his mind back to the recording of Rumours as the relationships of McVie and wife Christine and Nicks and Buckingham disintegrated.

But that's what anniversaries - and the release of a commemorative package of the original record, live album and outtakes - demand.

"That was life. It wouldn't have been the same album," he says. "The songs wouldn't have resonated the way they still do - we were all sad. We weren't in hate and loathing.

"The couples' dynamic is precisely why Rumours resonates so strongly as an emotive musical snapshot. Quite frankly, most bands are a bunch of guys who have nothing in common with each other at all apart from making music. 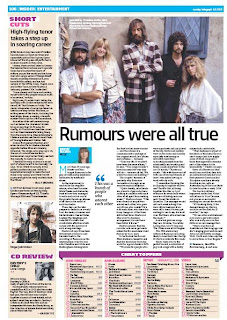 "This was a bunch of people who adored each other, who grew out of love, who couldn't live with each other, who have this funny hangover of that time still in their lives. Fleetwood Mac wasn't a business arrangement; it would have been better if it was."

Fleetwood knew that the record would never get made unless the five musicians could find a way to co-exist. So he booked the Record Plant studios in Sausalito and shut the band away from the world for a good chunk of 1976.

"We were five people who were hopelessly sad and joined at the hip," Fleetwood recalls.

"Stevie and Lindsey were on the rocks and Lindsey especially was having an incredibly hard time extricating himself from the relationship and working and being a musical partner to the love of his life.

"My wife then went off with one of my best friends; at least I was spared having to work with my wife.

"I remember thinking this is all going to implode and we can't handle this, all being together like this, so I got everyone far away from where we were all feeling insecure and I found the studio in Sausalito.

And what glorious songs they are - Dreams, You Make Loving Fun, Don't Stop and The Chain were all hit singles.

The 35th anniversary edition of Rumours is looking likely to head back into the top 10 charts worldwide this week. Many claim it to be the perfect record, a collection of pop rock songs with a darkly melancholic underbelly.

"That darkness was part of the fabric of this band but you can't escape just how poppy some of those songs are. I think that ingredient remains part of the reason for its accessibility," Fleetwood says.

News of a Fleetwood Mac world tour sent their fans into an online frenzy late last year; their planned American and European runs have already doubled in size, with an Australian leg of the tour likely for late this year or early 2014.

The tour would have happened earlier had Nicks' solo album In Your Dreams not proven so successful, sending her around the world.

"It's looking likely, if the demand keeps up, that we could be on the road for 15 months," he says. "We are all so well-behaved now and we get well looked after and everyone is in fine fettle so we can manage that.

"Stevie was down in Australia not that long ago and she's singing great and me and John can still hobble on stage. Well, I'm fit and John only has to move three or four fingers."

Rumours, the 35th Anniversary, is out now
Nickslive at Sunday, February 03, 2013
Share