As Fleetwood Mac kicks off its first tour in four years, Lindsey Buckingham reflects on the band's drug-fueled nights 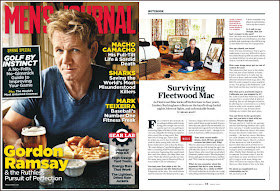 For Lindsey Buckingham, recording an album used to mean doing just enough coke to nail a guitar part at 3AM, getting in screaming fights with Stevie Nicks, and, in one case, allegedly throttling an engineer who erased the wrong track.  But that was all long ago.  These days, he wakes up at six, has breakfast with his three young kids, hits his home studio alone, and is done by dinner.  "It's a nice balance," says Buckingham, 63, who is reuniting with Fleetwood Mac for an arena tour beginning this month (and has a solo live album, One Man Show, out now).  "That's the whole lesson for me now.  For many years in Fleetwood Mac, it was a study in life out of balance."

You had your first child at 48.  Do you recommend late-life fatherhood?

It depends on the man.  You could almost say I'm someone who doesn't practice age.  I went to a high school reunion a few years back, and all these people seemed 20 years older than me, physically and mentally.  So having kids late is good if you're the kind of person who needs to wait - though in 20 years, I may have a different perspective.

Your most recent studio album, Seeds We Sow, got great reviews but didn't sell.  Why?

There's a disconnect between the preconceptions that go with being the age I am and what the music is.  I sent the album to Daniel Glass, who runs [hip record label] Glassnote, and he loved it.  Then he played it for his staff, guys in their twenties, and they said, "Well, what are we going to do with it?"

What do you remember about the argument that led to your leaving Fleetwood Mac for a while in 1987?

All I recall is that Stevie ran after me crying and yelling and kind of beating on my back.  I don't remember any physical confrontation, not to say there wasn't.

Is it safe to say, though, that ou had a temper in the past?

Sure.  It's been well documented.  But we were doing all sorts of substances, too, that probably had something to do with blowing certain behaviors way out of proportion.

Has age calmed you down?

Some of it was situational.  You've got to understand, it was very difficult for me to have Stevie break up with me and to still be in a band with her, to never get a sense of closure.  It took its toll emotionally.

How come drugs never got too out of control for your?

The substances that were in the studio were not part of my lifestyle at home.  I had to take them so I could stay up till two our three, and even then, Mick [Fleetwood] would want to go later.  My MO if I really wanted to leave would be to say, "I'm going to the bathroom," and then walk out the door and drive away.

Now that pot is practically legal in California, are you tempted by it?

No.  I did a lot of that back then, and it was good for a certain kind of abstract thinking.  But we all thought we had to be altering our consciousness on a daily basis in order to be creative, which turns out to be crap.  It's just about finding your center, that quiet place.

You and Stevie broke up decades ago, but you have to deal with her forever. What's that like?

You get used to it. And for me, getting married and having children was a positive outcome.  I wonder sometimes how Stevie feels about the choices she made, because she doesn't have a relationship - she has her career.  But there are a few chapters to be written in the Stevie-Lindsey legacy.  There's a subtext of love between us, and it would be hard to deny that much of what we've accomplished had something to do with trying to prove something to each other.  Maybe that's fucked up, but this is someone I've known since I was 16, and I think on some weird level we're still trying to work some things out.  There will never be romance there, but there are other kinds of love to be had.

It's about as complicated as a relationship can be.