In Your Dreams Movie Sneak Peak with Stevie Nicks 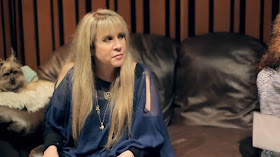 It's easy to forget that even the most legendary musicians grapple with self-doubt. Stevie Nicks reminds us of that in a new documentary, "In Your Dreams," which chronicles the making of her album of the same name.


In the exclusive clip below, Nicks discusses the recording of "Secret Love," a song she wrote for Fleetwood Mac's Rumours but never properly recorded for over 30 years. Oddly enough, a demo from those sessions found its way to YouTube, leaving Nicks with some mixed emotions.

"I said, 'I don't know how to feel about that," because I would have been happier if nobody ever heard 'Secret Love,' so I'm trying to look at it from the other way and go 'Well, everybody that's had it for 30 years is really happy that it's going to actually come out as a real song.'"

In the video, you can hear the original version and then watch as Nicks records the track with producer Dave Stewart, who also directed the documentary. For more information on "In Your Dreams," visit the film's official website. The documentary will screen around the U.S. for one night only on April 2, while Fleetwood Mac kicks off a world tour on April 4.


In 2011, Stevie Nicks released In Your Dreams, her first solo album in a decade and three since her iconic Bella Donna. Dave Stewart, he of Eurythmics, produced. Some critics called it her best solo album; reviews were generally mixed but mostly favorable. But the most important thing is that it was Stevie Nicks, writing new music, and writing collaboratively for the first time. Before she'd worked with Stewart, she'd always written her songs solo. The shift in creative process and creation of Nicks' most recent record are the subjects of a documentary that Nicks and Stewart also co-directed, also titled In Your Dreams.

The film, in addition to getting an intimate look at these two very talented people and their creative process, also features "rare never before seen personal scrapbook stills from Nicks’ childhood and family life, and a wealth of candid backstage and performance shots taken over the last 35 years." So, if you love Stevie Nicks/Fleetwood Mac enough to where this would be a draw (and of course you do), here's a movie for you!

Anyway, said documentary got a lot of buzz at the Toronto International Film Festival and SxSW, and now it is coming to theatres next week! April 2nd in most U.S. cities to be exact. Who wants to go see it? You? Let's go. It'll be great.