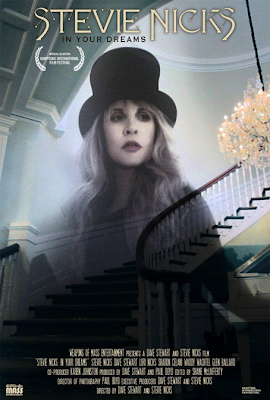 "In Your Dreams" Stevie Nicks Documentary In Theatres - April 2nd - ONE NIGHT ONLY!

NEW YORK, March 11, 2013 /PRNewswire/ -- Following the tremendous positive response to the Stevie Nicks documentary "In Your Dreams", an intimate portrait of one of rock's most enduring and legendary artists, at the Hamptons International Film Festival and the Mill Valley Film Festival, this up close portrayal of Nicks recording her critically acclaimed "In Your Dreams" CD in collaboration with Dave Stewart is now scheduled to screen in over 50 theaters across North America on April 2nd. Tickets will be available on www.inyourdreamsmovie.com once they go on sale. A current schedule of cities and theaters follows this release, with more cities to be added.

The "In Your Dreams" film is being distributed by Abamorama. Co-produced and co-directed by former Eurythmic Dave Stewart, "In Your Dreams" is a portrait of the elusive Nicks as she and Stewart embark on a musical journey to write and record the critically acclaimed album "In Your Dreams."  Nicks called this "the greatest year of my life" and felt compelled to share the joyful experience that she terms "the day the circus came to town" with her fans.  The record was co-written by Nicks and Stewart and produced by Stewart and Glen Ballard. Watch the trailer at www.inyourdreamsmovie.com

Nicks, one of the lead singers and emotional catalyst for Fleetwood Mac, is embarking on a world tour with them beginning April 4th in Columbus Ohio.  A multi Grammy Award winning artist and Rock & Roll Hall of Fame inductee, Nicks allowed cameras inside her magical old mansion high atop the hills of LA with a wild cast of musicians and friends.  The inner life of the legendary Nicks has by her design long been kept at a distance from the public. We learn in "Dreams" that her world features, costume parties, elaborate dinner feasts, tap dancing, fantasy creations and revealing songwriting and recording sessions all of which are captured on film. Also cameos by Edgar Allan Poe, Mick Fleetwood, Reese Witherspoon, a massive white stallion in the backyard, owls and naturally a few vampires who appear in several "home movie" style music videos.

Along with tracking the Nicks/Stewart creative partnership, "In Your Dreams" has plenty of other cinematic payoffs including rare never before seen personal scrapbook stills from Nicks' childhood and family life, and a wealth of candid backstage and performance shots taken over the last 35 years. The documentary was produced by Dave Stewart's production company, Weapons of Mass Entertainment.

Nicks, who has sold millions of records as a solo artist and writer of such iconic songs as "Landslide," "Gold Dust Woman" and "Edge of 17," is regularly cited by stars as diverse as Taylor Swift, Kid Rock, Courtney Love, Sheryl Crow, The Dixie Chicks and John Mayer as an iconic favorite and heroine and is a continuous inspiration to the world's top fashion designers.

"She is really real. It doesn't matter if she is singing in the make-up room or in the middle of a TV interview.  She is who she is, and she doesn't change," commented Stewart.

"This is our baby and we give her lovingly into your dreams.  From our tribe to yours," concluded Nicks.