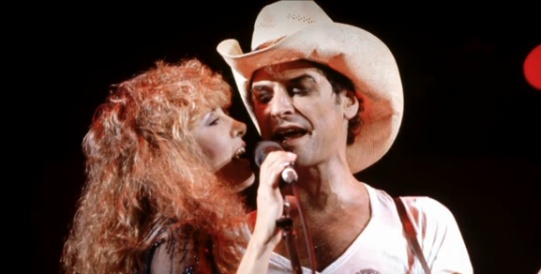 By JON BLISTEIN
MARCH 21, 2013 2:40 PM
Stevie Nicks gets candid in an upcoming interview with Oprah Winfrey, talking about music, her struggles with addiction and the recent death of her mother on Oprah's Master Class this Sunday, March 24th.

Click this link to watch more video from the show


On Sunday night's "Oprah's Master Class," Fleetwood Mac's legendary lead singer, Stevie Nicks, will open up about her compelling life, and no topic is off-limits, including her drug use at the height of her success.

In this sneak peek, Nicks says, "I used to carry a gram of cocaine in my boot at all times." Reflecting back at herself during that period, she confronts the memory, asking, "Could you have just laid off the brandy and the coke and the pot for two days?" -- admitting that she didn't look beautiful; she looked high.

But drug use didn't hinder her success, and neither did her failing personal relationship with her musical partner Lindsey Buckingham. As Fleetwood Mac wrapped its No. 1 album "Rumours," she broke up with Buckingham, insisting that their focus should be on the success of the band: "Our breaking up is not going to break up this band. And I'm not going to quit and neither are you," Nicks told him. "The band was way more important than each separate person's problems. And we knew that."

Nicks says that if she and Buckingham hadn't joined Fleetwood Mac, their lives would have been dramatically different, and they probably would have gotten married and had a child.

But fate took them in a different direction: They did join the iconic band, which had existed for nearly 10 years before Nicks and Buckingham were brought in. "And then, bang, Mick [Fleetwood] called. And life changed. Overnight," Nicks says. After buying Fleetwood Mac's existing records and listening to them twice, Nicks says that she told Buckingham, "I think that we can add to this band. I think that, you know, I think they have a real kind of witchy side that would appeal to us."

Buckingham was more skeptical, instead wanting to finish the album the duo had started and even go back to school, but Nicks would have no part of that. She wanted to join Fleetwood Mac, and the rest is history.

In the interview, Nicks also addresses her unflinching decision-making nature -- and it all began with her endlessly supportive mother: "My mom would always say to me, 'You'd better be the president of your company, or the lead singer of your band, or the boss. Because you don't like to be told what to do.' And she was totally right." And while her mother encouraged her to do whatever she wanted, she was also strict. As Nicks says, "She was hard on me in a lot of ways because she wanted me to be independent. ... And she wanted me to be fearless."