The Austin jam session is the latest in a series of performances this year that began at Sundance, with Citi sponsoring additional events in Los Angeles and New York. Confirmed performers include Grohl, Stevie Nicks, John Fogerty, Rick Springfield, Lee Ving of Fear, Rick Nielsen, Brad Wilk of Rage Against The Machine, Corey Taylor of Slipknot and Stone Sour, Chris Goss of Masters of Reality and Alain Johannes. The Meat Puppets will be the opening act.


THIS EVENT IS SOLD OUT 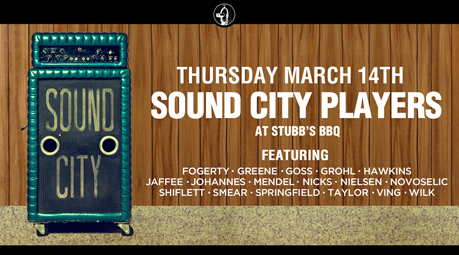 Tickets for the event will go on sale Tuesday, March 5, at 4 p.m. ET to Citi consumer credit and debit cardmembers as a complimentary gift with a $25 purchase of the "Sound City" feature documentary Blu-Ray on CitiPrivatePass.com. Purchases will be limited to two per Citi member on a first-come, first-served basis. Select admission will be available to SXSW badgeholders via lottery. All attendees will also receive a complimentary copy of the soundtrack, courtesy of Citi.