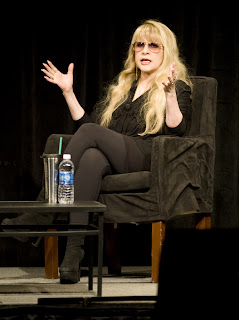 AUSTIN – Stevie Nicks name dropped Janis Joplin, Jimi Hendrix and Grace Slick during her SXSW Interview Thursday afternoon with moderator Ann Powers of NPR. From Joplin, she got the flamboyance and the attitude. Hendrix gave her humility and grace. Slick provided the slinky elegance.

“Those are the three people that I emulated for who I was going to be onstage,” said Nicks in her trademark black attire and dark sunglasses as she sat inside the Austin Convention Center.

She wanted to mix feminine and masculine attributes without forgetting to be elegant. For an hour Nicks conversed with Powers as a packed room watched and listened attentively. The legendary female rocker, one of the most influential women in music of the last four decades, has been especially visible in the last two years. Her 2011 solo effort In Your Dreams spawned a tour that stopped at Verizon Theatre in Grand Prairie. She also has a documentary of the same name that chronicles the recording of the majestic disc with producer Dave Stewart. Plus, she’s in SXSW keynote speaker Dave Grohl’s labor-of-love documentary Sound City: Real to Reel. 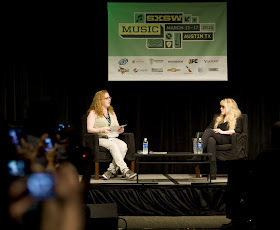 But the gist of the Nicks interview was historical. She talked about Fleetwood Mac, naturally, particularly about the harmonious artistic blend of Christine McVie, Lindsey Buckingham and herself. There were each intent on harmony, working diligently to develop the three-part harmony that characterized the modern-day Mac sound. They each approached songwriting differently, which in turn proved mutually complimentary. There was plenty of time devoted to her solo career, particularly her pivotal solo debut 1981′s Bella Donna. Nicks approached her solo album as a way to give a home to her compositions that didn’t fit the group dynamics. But she admits that her band mates were nervous that she’d find success alone and then exit stage left.

“They were so terrified that I would do that record and then I would quit,” she said. “I really had to convince them that I’m not going anywhere.”

She’s still with Fleetwood Mac 32 years later. The band comes to Dallas’ American Airlines Center June 4. And what’s the secret of Nicks’ longevity, the magic potion that keeps her voice sturdy after nightly abuse during the heady ’70s and ’80s? Vocal exercises. She demonstrated by doing nonsensical vocalizations that sounded like on-pitch baby gurgling.