Dave Grohl Keynote:
His “Sound City” documentary played Wednesday night during SXSW Film, and Thursday, Grohl delivers the 2013 Music keynote at 11:00 AM CDT in Ballroom D of the Austin Convention Center. It’s open to badgeholders but will be streamed live at sxsw.com and npr.org. Check sxsw.com for updates or changes in the schedule. 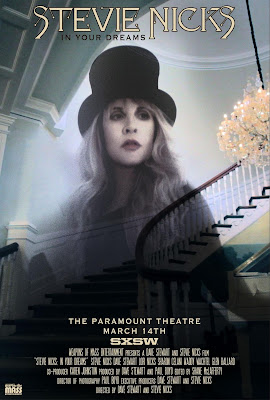 Meat Puppets, Dave Grohl, and the Sound City Players, 8pm, Stubb's - It's time for rock's friendliest superstar to invite the Meat Puppets to open and then for Stevie Nicks, John Fogerty, Nirvana's Krist Novoselic, Rick Springfield, Fear's Lee Ving, Cheap Trick's Rick Nielsen, Rage Against The Machine's Brad Wilk, Slipnot's Corey Taylor, and more to play at what is the festival's craziest, most star-studded concert. If you end up having grand kids  you'll be telling them about this one.

SXSW Stevie Nicks Interview:
The Fleetwood Mac chanteuse is everywhere this year. She’s in her own documentary, “In Your Dreams,” and in Grohl’s “Sound City.” She’ll talk Thursday with NPR’s Ann Powers. 5 p.m. in Room 18ABC in the Convention Center. This interview is open to all Music and Platinum badges as well as Artist Wristbands.

In Your Dreams:
The movie “In Your Dreams” about recording Stevie's new album will premiere at 2:30 p.m. today at the Paramount Theatre.