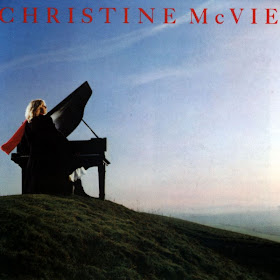 Lindsey Buckingham gets all the credit. Stevie Nicks gets all the attention. But Christine McVie was the glue. She bridged the gap from obscurity to fame. Nicks twirled, but it was Christine with her understated beauty that enraptured us. And it was Christine's track that broke the new Fleetwood Mac. Yes, "Over My Head" paved the way for "Rhiannon." And Bill Clinton's theme song, "Don't Stop," was not the work of an American, but a Brit, Christine McVie.


And for a while there, Christine was part of the Fleetwood Mac reunion, but then she dropped out. And too often band names are brand names and individuals are forgotten, but in Christine's case, this is unjust.

But all her Fleetwood Mac tunes stay in rotation. And if you loved those, maybe you missed her 1984 solo
album, produced by Russ Titelman, that had some traction but then disappeared, as if it were never made, but there are a few tracks that I'll never forget, that titillate me to the core.

It's the jangly guitar part and then the pure voice. The track exudes honesty, which is the heart of great music. You really feel like Christine has been waiting all day, cleaning the house, prepping her look, waiting for him to show up.

Who hasn't done this?

It's the essence of love. The anticipation!

Eureka! Why is it that we lose our appetite? Suddenly we can survive solely on the butterflies in our stomach. We feel detached from the world but more a part of it than ever before.

"Well, I know my baby
He makes me want to scream and shout
Ooh, he shows me
Shows me what it's all about"

Funny how all the manuals tell you to be cool. Come on, every year there's a best seller supposedly delivering the key to romance. That you should hang back, not show your emotions, not move too fast, that you need to make them prove their love and commitment.

Love is a runaway train. A journey you've waited for your whole life that's even better than you imagined. And when you're caught up, you never want to let go. They say money is power. That's completely wrong. Love is power. Never forget it.

And just as magical as the acoustic guitar is in "I'm So Excited," the piano entrances you in "Ask Anybody."

"He's a devil and an angel
Ooh, the combination's driving me wild"

Don't we all know it! We fall prey to their wink, their charisma, but they don't return our phone calls, we see them out with other people, we want to let go, but we can't.

"He's a saint and he's a sinner
Ooh, somehow he acts just like a beginner
I guess he's still a child"

Oftentimes they are. They've gotten by on their looks. They're flawed. But we get caught up in their energy, we get on their trip casting aside doubt until...they let us down and we crash so hard we wonder if it was all worth it, even though we know it was...

You ask for advice, but you don't want to listen to it. What you really want is someone to be irrational, just like you, to tell you to go for it. And despite all the naysaying, you keep going back to the well, you can't let the person go, until you've been so hurt that you admit to your friends they were right.

"But that's all right 'cause I know somehow
We can make it right and I'm putting up a fight
Somehow, somewhere he'll change
And we'll try it all over again without all the pain"

She's delusional. You've seen the movie. You've probably even lived the movie. It's not until you're old and gray that you finally realize that people don't change, and that you certainly can't change them via hope and sheer will. If only they were a little bit different...but they're not.

And then there's that wistful solo! The electronically treated sound that Titelman used to such great success on Steve Winwood's "Back In The High Life." And when it comes in again, unexpectedly, at the end of the song, you can just see it, her staring out the window, sitting in her kitchen, lying in bed, fully awake, engrossed by the thought of him, unable to let him go, even though she never really had him.

And speaking of Winwood, he vocalizes on "One In A Million."

But none of the aforementioned tracks were hits.

But "Got A Hold On Me" was. Maybe because it's the most Fleetwood Mac track on the album. It's got Christine's breathy vocal, a bouncy beat and a catchy chorus. It's really good. But not as good as "So Excited" and "Ask Anybody," which would have fit just perfectly on a Fleetwood Mac album from the seventies, when the band took chances and was not afraid to be dark and evidence its roots.

And maybe because "Christine McVie" was a relative disappointment, Christine retreated. To the point where the press still follows Stevie Nicks's every move, but Christine's been forgotten.

But for those of us who just didn't listen to the songs on the radio, who bought the albums and read all the credits, saw the musicians as three-dimensional, Christine McVie was always the queen. She may not have been a witch, but we'd still shake if we approached her in a bar, we know she'd be honest and forthright and tolerate no b.s.

Christine McVie blazed her own path, we were in love with her back then, and we still are now.

Bob Lefsetz is the author of "The Lefsetz Letter." Famous for being beholden to no one and speaking the truth, Lefsetz addresses the issues that are at the core of the music business: downloading, copy protection, pricing and the music itself.

"The Lefsetz Letter" has been publishing for over 25 years. First as hard copy, most recently as an email newsletter and now, for the first time, in blog form.