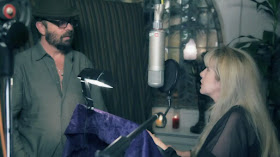 Could something along the lines of "My Name is Stevie" (in the vein of Barbra Streisand's "My Name is Barbra") or "Stevie With an I-E" (in the spirit of Liza Minelli's "Liza With a Z") be in the tarot cards?

The raspy-voiced veteran says it's an idea her pal Dave Stewart has been trying to get her to embrace.

Nicks made the comments while appearing at the Canadian premiere of her documentary "In Your Dreams," which follows her and the Eurythmics hitmaker as they write and record her 2011 album of the same name.

She says Stewart's plan would involve massive video screens revealing images from Nicks' storied life. But the "Landslide" crooner is laughing off the idea, noting: "I'm not Barbra Streisand."

Nicks' creative bond with Stewart is traced in an affectionate documentary that reveals the veteran rockers nit-picking over melodies and brainstorming lyrics at her home recording studio in California. The film plays in Toronto through Thursday before heading to other cities.

After the film, Nicks told a movie theatre full of fans that Stewart sees a new chapter in her career.

"He wants me to have video screens, like a big room of video screens where it's all my whole life (up there). And I (said): 'Dave, I'm not Barbra Streisand'," Nicks said smiling. "But maybe. Maybe someday."

She notes that her solo shows already feature a lot of talking, as opposed to the hit-laden concerts with her band Fleetwood Mac.

"It's very different. Fleetwood Mac's much more sophisticated and grownup and my show is just like a big slumber party in an auditorium. And I tell everybody the meanings of all these new songs. Because that's how I draw people in," says Nicks, who turns 65 on May 26.

After the movie, Nicks took questions from audience members, recounting the origins of her steadfast determination to be a star and dark days surrounding the recording of "Rumours."

"It wasn't really a pleasant experience," she says.

"Lindsey (Buckingham) and I had pretty much just really broken up, and we'd kind of broken up off and on for a year before that. So this is 1977. None of the couples were happy... which, on one hand, really lends to the creative process."

The film includes interviews with Nicks about Fleetwood Mac's rise to fame, current sources of inspiration, childhood memories and her surprising passion for the "Twilight" franchise.

She notes that promoting the album "In Your Dreams" involved a gruelling two years of touring and promotion. In the end, it didn't amount to much.

"I didn't sell a lot of records, you guys. For me, for a big act like moi, I didn't. Worldwide I probably sold 300,000 records. It's awesome if you're an unknown artist and you have a hit single but it's not really that awesome if you're Stevie Nicks," she said.

"It's such a different age now."

Fleetwood Mac performs at the Air Canada Centre on Tuesday. They head to Ottawa on April 23, Winnipeg on May 12, Saskatoon on May 14, Edmonton on May 15, Calgary on May 17 and Vancouver on May 19.