As Fleetwood Mac embark on a world tour, we look at the renewed love for a band that defined the 1970s.
Metro.UK 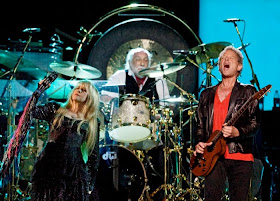 
I’m as overawed to meet Mick Fleetwood, the towering drummer from legendary Anglo-American rock act Fleetwood Mac, as a hobbit greeting Gandalf – though this wizard sports a batik waistcoat and bright pink socks.

‘We had no concept of the enormity of what we were making with Rumours,’ he says, speaking of their legendary 1977 album. ‘But we did know it was something special and that helped us focus when we were all so desperately unhappy. I can’t think of any other band where all this s*** has happened.’

Earlier this year, an extended edition of Rumours, which had already sold more than 40million copies, went 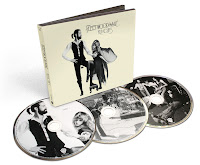 straight back into the British charts at No.3. An epic world tour starts tonight and will hit Britain on September 24, with 2013 shaping up to be a triumphant reunion year. But it’s not just a nostalgia trip: people far too young to remember Rumours the first time around seem obsessed with the music and the story behind it.

Indeed, it now seems unbelievable that Fleetwood Mac’s 11th album, recorded amid the crossfire of three relationship breakdowns, was ever finished at all. The marriage between bassist John McVie and singer/keyboardist Christine was crumbling, while singer Stevie Nicks and guitarist/singer Lindsey Buckingham were going through their own messy split. Even Fleetwood was in the middle of divorce proceedings.

Everyone was strung out on veritable snowdrifts of paranoia-inducing cocaine, working in a room from which all the clocks had been removed, but it somehow resulted in one of the most flawless rock-pop records of all time.

‘The music was the biggest reason we became successful,’ admits Fleetwood, the only constant member of the group since it started as a blues outfit back in 1967. ‘But we’re fully aware that there’s a duality to it. You couldn’t have devised a PR campaign so clever but we were really pretty naive.’

The resurgence of Mac love has taken many forms in recent years: clubland reworks; a Rumours T-shirt in Topshop; and a covers album featuring the likes of Tame Impala and Haim (the BBC Sound Of 2013 winners, whose music has been compared to Fleetwood Mac’s melodic soft rock). The NME even dubbed Stevie Nicks ‘the ultimate rock goddess’. When talking about Rumours recently, Nicks said: ‘I think if I was 20 years old, I would definitely want to be in that band.’

Fleetwood is likewise thrilled and inspired by this continued popularity. ‘A lot of bands, including us, never know when the audience is going to finally disappear,’ he says.

‘But we have a whole influx of new fans, young people who’ve been brought up on us by their parents or picked us up on the internet. There’ll be people on this tour in their seventies and others seeing us for the first time, and that’s really cool.’

A major part of Fleetwood Mac’s Rumours-era magic involved the complementary contrast between the two female vocalists – Christine McVie’s cool and smoky tone set against Nicks’s utterly distinctive voice, which could be a Californian twang or a Janis Joplin-style deep belter by turns. But Christine retired from showbiz in 1998.

‘If they wanted me to, I might pop back on stage when they’re in London,’ she says, gracing me with a rare interview, ‘just to do a little duet or something like that.’

That news is likely to set fans whirling like a batwing-sleeved Nicks during a performance of Rhiannon. And almost as exciting is the prospect of the first new music since 2003.

Buckingham, Fleetwood and John McVie went into the studio last year to record tracks that Nicks, who was mourning the death of her mother at the time, later laid down vocals on. Fleetwood hints there might be an EP in the pipeline and very possibly an album later this year.

‘I think people will let us know if they want an album,’ he says. ‘It could definitely happen, we’ve got the goods. We really want to shove some new s*** out there – it may not sell zillions but it’s an important thing to do artistically, we think.’
Whether or not they produce new music, the band who, against all odds, are still friends will always have a work of bittersweet perfection in Rumours. As Christine explains: ‘There was no bulls*** on that record – it was completely real and truthful. And that lasts.’