The modern rumor-mill media world, with its Twitter gossip 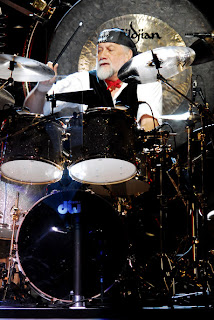 and screaming TMZ headlines, has nothing on the dramas of Fleetwood Mac.

By  Kevin Joy
The Columbus Dispatch


Although its past is littered with divorces, drugs, lineup changes and lustful behavior — including a painful split between singer-guitarist Lindsey Buckingham and free-spirited frontwoman Stevie Nicks — the ensemble hasn’t buried its missteps.

“We still choose to be more revealed than not,” said drummer Mick Fleetwood, the only player to remain a constant since his namesake band’s 1967 inception. “I think you’d find in any of our interviews, Stevie, and even Lindsey, are almost too open about things that are very personal, really.”

The enduring group is known just as much for refined pop-rock and blues music — in particular, the aptly titled Rumours, which was reissued last year.

Released in 1977, the album recorded at the height of Fleetwood Mac’s turmoil ultimately yielded four Top 10 singles (Don’t Stop and Dreams among them) and, today, spawns a tour kicking off in Columbus.

The Rumours-era unit, reunited since 1997 — with the exception of keyboardist Christine McVie, who retired one year later — has continued to go its own way.

That stamina, said the 65-year-old Fleetwood, “really is charged with some of the real principles of people who have worked at being able to be together.

“This is a journey that is unfolding as we speak.”

He spoke to The Dispatch before tonight’s show in Nationwide Arena.

Q: What has it been like preparing for this tour?

A: We’re pretty much closing in on the last four to five days of rehearsal. We’ve been at it for about six weeks. No matter what you do, you’re always down to the wire.

We’ve done this a lot through the years. There’s some anxieties — tweaking the set and wondering: “Is that the best song to do there; what would make it different for the audience?” — but we’ll be up and fighting. We always are. The band’s playing beautifully.

Q: Rumours turned 35 last year. Was that motivation to hit the road again?

A: We do it when we feel that this is really a cool thing — something that’s worth a (expletive). That’s the state of the nation with the four of us. We’re all happy to perform. We don’t have to do it.

We’re all in our 60s. We can’t run this like a huge business, which is quite apparent. We have to know that everything’s OK as people — which, for all of our problems, . . . we are feeling really good about all being together.

Q: What are the dynamics of a Fleetwood Mac concert in 2013? Might we see laser lights — or Stevie Nicks flying across the arena in a gilded cage?

A: Unless I fell asleep during the ’70s, which is highly probable, we’ve never been the sort of band that had their production be the reason someone comes to see us.

Having said that, we’re blessed to be able to make a really good effort. It has become grander, the technology we draw on. We don’t have firebombs — simple lights, some bigger screens than we ever used.

It’s going to be really aesthetically tasteful, to complement the songs in a holistic way.

Q: Why do listeners still maintain such a close connection with Rumours?

A: It is extraordinary that the album seems to rebirth itself quietly all the time. And, now (with the 2012 reissue), it’s been really rebirthed in a quite profound way.

One has to say that it’s a body of work that, sonically, does not age. Thank goodness we did not put all those cheap ’70s and ’80s effects with plastic drums, that sort of stuff. You don’t really know where this album was made.

It’s just very pure. There isn’t a lot of hype in the way we produced that album, a lot of care with the layering. The songs and the scenes and the story really seemed to take on almost a part of a responsibility of representing a generation.

That album became an iconic signpost for a lot of things that have nothing to do with music.

Q: An allusion to the musicians’ chaotic offstage lives?

A: This album opened a door that is still wide-open. I think the songs were well-crafted: Just when you think this could be getting a little sweet and cute, whatever they call accessible pop music, you suddenly realize it’s not.

Fleetwood Mac inherently has a dark side — these five people, now four, in a life puzzle. We were probably fairly naive in many ways. I think people identify with that. They’re invested in our story as people.

Q: How would you describe the relationship among band members today?

A: It’s all good, and it’s always interesting. We don’t always see eye to eye on bits and pieces. One of the biggest misconceptions with all the ups and downs and inroads and so-called horror stories — the one thing people forget is that we actually really love each other.

You see Stevie and Lindsey up there, knowing they’ve had huge differences of opinion. But they’r e there. They have a huge regard and love for their journey.
Nickslive at Thursday, April 04, 2013
Share