'In Your Dreams,' documentary on making of latest Stevie Nicks album, to play at Ross 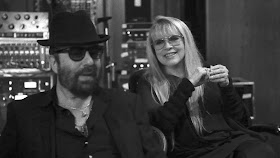 
Stevie Nicks spent most of 2010 making “In Your Dreams,” her first solo release in a decade. Collaborating with former Eurythmic Dave Stewart, they wrote and recorded much of the album in her old mansion high atop the Hollywood Hills. 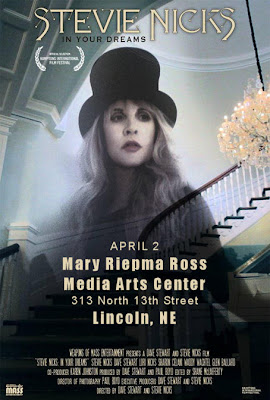 Stewart, who has been shooting video since he bought a camera out of Australian pawn shop decades ago, convinced Nicks to film the sessions.

The result of that multiple camera, monthslong shooting is “In Your Dreams,” a revealing 1 hour, 40 minute “making of” documentary that’s playing Tuesday only in theaters across the country, including the Ross Media Arts Center.

Directed by Stewart and Nicks, “In Your Dreams” follows the writing and recording process in Nicks’ home, where a stairwell became a vocal chamber, and in a couple of Los Angeles studios. It ventures into the past  briefly to sketch her life, writing and beliefs.

It’s a pretty fascinating journey with some moments of insight.  An old clip of a disagreement between Nicks and Fleetwood Mac’s Lindsey Buckingham over one of her lyrics captures the end of their writing relationship because she didn’t want to be told what to do.

Back in the house, she shows her studio acumen when hearing the playback of a song and finding Stewart’s original guitar solo missing. Stewart and producer Glen Ballard claim that it is the same. Playing the first version of the solo found deep in ProTools, Nicks is proved correct, and the mix is changed.

Early in the film, Nicks talks about how she’d like young people to see the movie to learn how to make a record the old way, with heart and feeling.

That’s a fine sentiment. But Nicks’ old way is far different from anything a new band or artist could do. She’s got a lineup of musicians that includes guitar master Waddy Wachtel, her Fleetwood Mac mates Buckingham and Mick Fleetwood, and Tom Petty and the Heartbreakers drummer Steve Ferrone and guitarist Mike Campbell, who co-produced the record with Ballard and Stewart.

The documentary is framed as a song-by-song journey through “In Your Dreams,” with some music video-like segments for some of the songs. If it had been released at the same time as the album dropped last year, it likely would have, and to some measure rightfully, been seen as the world’s longest promotional video.

But it takes a different feel a year later. It does provide a knowing, if authorized look inside the elusive Nicks, who remains a spectacular rock singer. It’s a nice glimpse of how a big-star record is made and therefore a must-see for Nicks fans.
Nickslive at Monday, April 01, 2013
Share