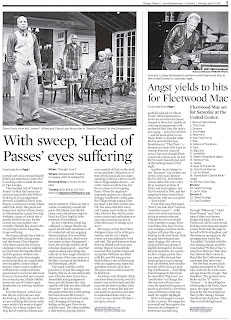 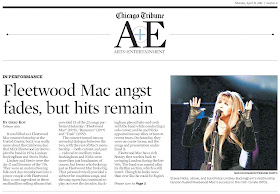 During its first tour in four years, Fleetwood Mac didn't have a new studio album to unveil, but the legendary classic rockers still had a product to plug. Though it's hard to believe 35 years have passed since the band's landmark album "Rumours" was released, a newly remastered edition just hit stores to honor the occasion, rounded out by a slew of bonus tracks and even some rare DVD footage (exclusive to the super deluxe edition).

As a result, it was no surprise to see much of that masterpiece on display at a sold out United Center, and even though the decade that's passed since the Mac's last original album is inexcusable, no one could deny the past's ability to once again connect in 2013. Come the opening cries of "Second Hand News," the defiant rocker "The Chain" and the always enchanting "Dreams," it was evident the time in between recordings or tours hasn't deteriorated the unbreakable chemistry shared between founders Mick Fleetwood and John McVie, alongside longtime collaborators Lindsey Buckingham and Stevie Nicks.

Full Review with Photos at Concertlivewire.com

Photos below by Alicia Bailey - check out her gallery on Facebook 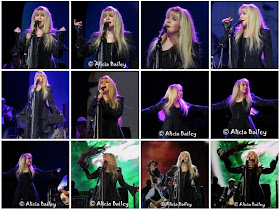