But one reason why the band endures is the musicianship at its core -- its ability to take lesser-known tracks and make sure you don't even think of leaving your seat. (I couldn't leave if I wanted to: A seat Nazi at my end of a long row made it clear she wasn't moving for anyone, for any reason.)

On a night filled with her distinctive, raspy vocals, Stevie Nicks' prowess was perhaps best noticed on "Sisters of the Moon," a "Tusk" track that hasn't played live since the late 1970s. As the song built to its climax, her vocals only intensified in their raw emotion. 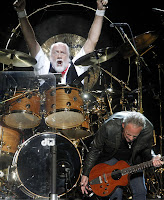 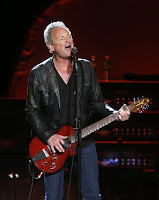 "I'm So Afraid," a bluesy number from the band's 1975 self-titled album, is unknown to pop audiences, but front man Lindsey Buckingham matched Nicks when he howled its haunting lyrics. He topped it off with an extended, blistering guitar solo that was a highlight of the night.

It was one example of Buckingham's extraordinary versatility. On a rearrangement of "Never Going Back Again," from "Rumours," he slowed the pace to a crawl and a whisper. That contrasts with his live take on 1987's lushly produced "Big Love," which on Monday was stripped down to a man ferociously strumming his acoustic guitar while voicing his anxiety over romantic entanglements.

One such entanglement, a decade earlier, was famously with Nicks, and provided much of the tension that made "Rumours" such a global smash. On the moments when the two connected Monday night -- a lingering glance, a brief touch -- the crowd went wild.

The band's namesake members, John McVie on bass and Mick Fleetwood on drums, yielded the spotlight most of the night while providing the rhythm that let Buckingham and Nicks shine. McVie and Fleetwood sparkled during "The Chain" -- McVie with his signature bass solo and Fleetwood with his relentless pounding on the drums as the song reached its frenetic close. 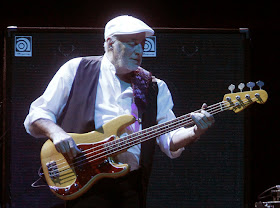 Christine McVie, the keyboardist and songstress behind "Say You Love Me," "You Make Loving Fun," "Little Lies," and "Hold Me," has amicably left the band and declined overtures to join the tour. Despite the Garden show's success -- including Nicks singing McVie's lines in "Don't Stop," her presence in the band is irreplaceable.

Other standout moments:
Rather than close on the high note of "Don't Stop" -- perhaps an obvious choice -- Buckingham and Nicks opted for "Say Goodbye," the lone track performed from 2003's "Say You Will." Before nearly complete silence, the duo professed their enduring affection for each other with the night's final lyrics: "Once you said goodbye to me // Now I say goodbye to you."