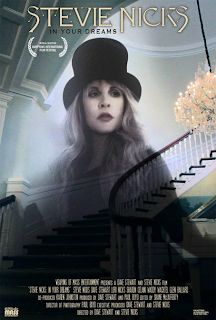 When someone co-creates a cinematic love letter to herself, you can’t expect an edgy portrait complete with flaws.


So In Your Dreams, a chronicle of the recording sessions for Stevie Nicks’s 2011 studio release of the same name, offers few deep, revealing insights into the rock diva, but it does have some surprises.

Who knew Nicks was smart, for example – I mean really smart? She’s crystal clear about her artistic vision, and uses the film to explain the inspirations for the tunes – everything from Edgar Allan Poe to Hurricane Katrina.

Recording session sequences, shot under the co-direction of former Eurythmics guy and film freak Dave Stewart, who produces and plays guitar, track the creative process revealingly. I kind of love how Nicks throws her weight around, artistically speaking, making demands and getting her way.

She can get whomever she wants to play with her – Waddy Wachtel and old Fleetwood Mac pals Mick Fleetwood and Lindsey Buckingham – so the quality of the musicianship is high.And archival photos of her childhood give the film some historical flavour.

Less interesting are the ways the doc incorporates music-video-like footage. Stewart is an expert at creating this kind of material, but it feels like unnecessary filler designed to solve the editor’s problems, who otherwise gives Nicks exactly the celebration of her diva-ness she was looking for.

STEVIE NICKS: IN YOUR DREAMS (Dave Stewart, Stevie Nicks). 100 minutes. Opens Monday (April 15) at the TIFF Bell Lightbox. The special screenings on April 15th of In Your Dreams with an appearance by Stevie Nicks are now sold out.